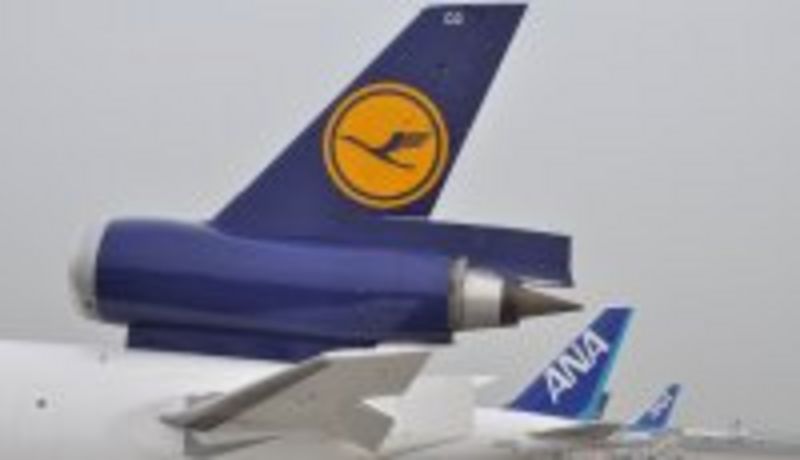 All Nippon Airways (ANA), Japan’s largest airline, and Lufthansa Cargo AG, one of the world´s leading air cargo carriers, have launched an innovative air cargo joint venture on Japan-Europe routes. Since 1 December, both airlines have commenced joint sales of shipments on flights from Japan to Europe.

On 2 December the first shipment sent by forwarder Schenker-Seino Co. Ltd and booked via Lufthansa Cargo was transported by ANA on flight number NH 277 from Tokyo to London. It consisted of three pieces of general cargo and weighed 153 kilograms. Due to the direct flight of ANA between the two cities, the customer was now able to take receipt of his shipment approximately 16 hours earlier than by choosing the transfer connection via Frankfurt.
On the same day the Lufthansa Cargo freighter flight LH 8385 carried the first shipment booked through ANA. The load weighed 1.8 tonnes. By accessing cargo capacities on freighter aircraft, it is now possible for ANA customers to send big volume freight and cargo that may only be transported on freighters, directly from Tokyo to Frankfurt.

The joint venture benefits customers by providing a larger and faster network with more direct flights, more destinations and more frequencies.   By moving under one roof at major stations, such as the airports Narita and Nagoya in Japan and Dusseldorf and Frankfurt in Germany, customers can enjoy the services of both airlines at a single location.

Akira Okada, ANA Cargo CEO, said: “I am delighted that we have implemented the world’s first cargo joint venture of this kind. This partnership will improve the level of service offered to customers by generating a greater selection of routings and a wider range of service options.”  Customers will derive further advantages from enhanced quality and improved flexibility. Time-saving will be an additional benefit, with customers having only one location for export drop-off and import delivery.  “With the joint venture, both airlines will boost their position in global competition and make even better use of their aircraft capacities”, underlines Okada.

Peter Gerber, Lufthansa Cargo Chairman and CEO, said: “This cooperation marks a great step for our customers. They will benefit from a more attractive network. We are looking forward to intensifying our cooperation with ANA, which sets a further milestone in bringing the economies of Japan and Europe closer together.”

ANA received antitrust immunity, i. e. approval for the joint venture from the Japanese Ministry of Land Infrastructure and Transport, beginning of September 2014 after filing for it in spring. In addition, the joint venture was positively assessed by external counsel for compliance with relevant EU antitrust regulations.

About ANA
All Nippon Airways (ANA) is the eighth largest airline in the world by revenues (2013) and the largest in Japan by passenger numbers and cargo tonnage (2013). Founded in 1952, ANA flies to 36 international and 51 domestic destinations with a fleet of 242 aircraft that serves a network of 187 routes. The company has 14,000 employees. In 2013, it carried 49 million passengers and 1,187 thousand tons cargo generated revenues of 1,601 billion yen. ANA has been a core member of Star Alliance since 1999 and for passenger traffic, has joint-ventures with United Airlines on trans-Pacific routes and with Lufthansa, Swiss International Airlines, and Austrian Airlines on Japan-Europe routes. ANA was voted Airline of the Year for 2013 by Air Transport World, and was awarded five stars by the world's leading airline and airport review site, Skytrax for 2013 and 2014. ANA is the launch customer and biggest operator of the Boeing 787 Dreamliner. ANA recently started a new cargo business unit, ANA Cargo, which is covering sales, marketing and operations to see further business expansion with its current ten B767 freighter aircrafts and Okinawa cargo hub.

About Lufthansa Cargo AG
Lufthansa Cargo ranks among the world’s leading cargo carriers. In the 2013 business year, the airline transported around 1.7 million tonnes of freight and mail and sold 8.7 billion revenue tonne-kilometres. The Company currently employs about 4600 people, worldwide. Lufthansa Cargo focuses on the airport-to-airport business. The cargo carrier serves around 300 destinations in almost 100 countries with its own fleet of freighters, the belly capacities of passenger aircraft operated by Lufthansa and Austrian Airlines, and an extensive road feeder service network. The bulk of the cargo business is routed through Frankfurt Airport. Lufthansa Cargo is a wholly owned Lufthansa subsidiary of Deutsche Lufthansa AG.