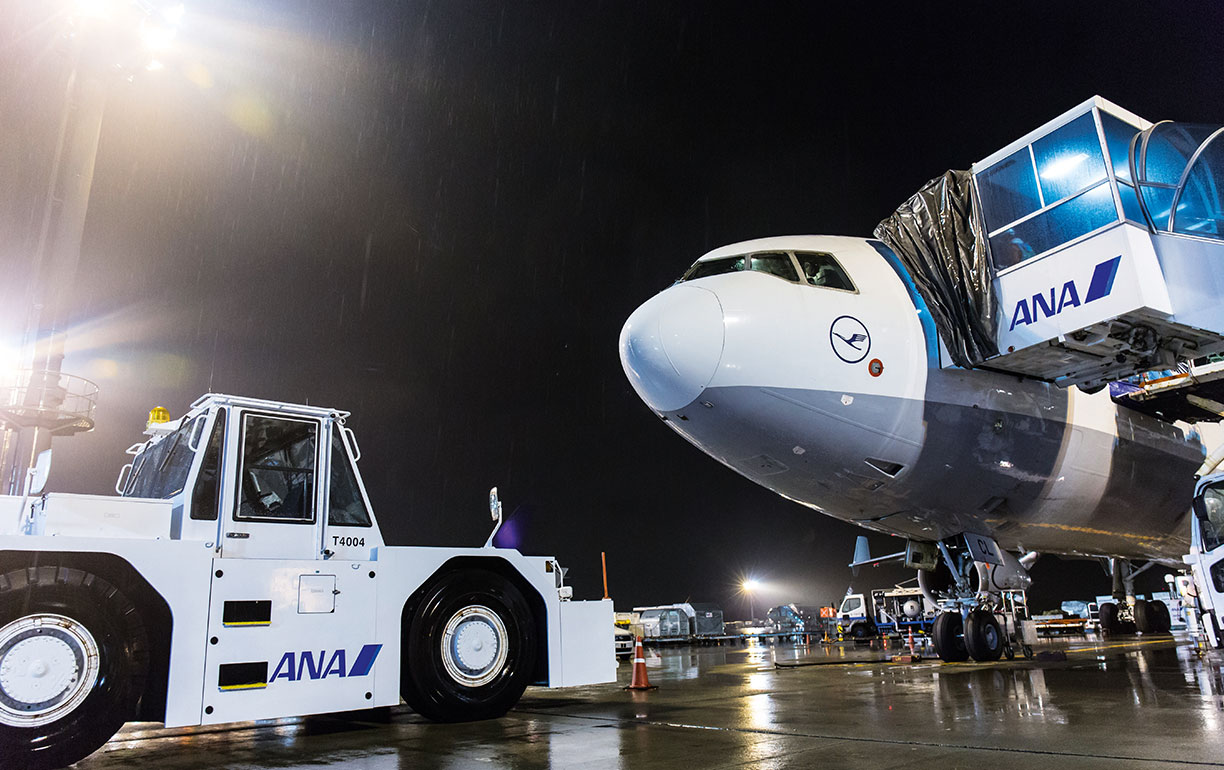 The joint venture between All Nippon Airways (ANA) and Lufthansa Cargo is off to a successful start. planet spoke with managers from both parties in Düsseldorf and was there during the unloading of a 787 Dreamliner carrying freight for both companies. One Friday afternoon in February: flight NH 941 lands at Düsseldorf Airport right on time. Twelve hours earlier, the Boeing 787-8 of All Nippon Airways (ANA) had taken off at Tokyo-Narita – carrying 134 passengers and 15.4 tons of freight.

The machine’s freight compartments held not only the passengers’ luggage, but also valuable and urgently needed goods. It is all part of a ground-breaking new joint venture between ANA Cargo and Lufthansa Cargo, which has already been up and running since the end of last year.

The joint venture between All Nippon Airways (ANA) and Lufthansa Cargo is off to a successful start. planet spoke with managers from both parties in Düsseldorf and was there during the unloading of a 787 Dreamliner carrying freight for both companies. One Friday afternoon in February: flight NH 941 lands at Düsseldorf Airport right on time. Twelve hours earlier, the Boeing 787-8 of All Nippon Airways (ANA) had taken off at Tokyo-Narita – carrying 134 passengers and 15.4 tons of freight.

The machine’s freight compartments held not only the passengers’ luggage, but also valuable and urgently needed goods. It is all part of a ground-breaking new joint venture between ANA Cargo and Lufthansa Cargo, which has already been up and running since the end of last year.

Lufthansa Cargo customers, in turn, benefit from the cargo capacity on ANA’s direct flights in wide body passengers airliners to the major European airports. They can send their consignments directly to Paris and London or, as in this case, Düsseldorf without a detour via the Frankfurt hub.

This often saves valuable hours. Joint marketing of cargo capacity from Europe to Japan will commence in summer 2015. Customers in Europe will then also benefit from the expanded network of flights between Japan and Europe, with more direct flights, increased capacities and shared handling.

“We are extremely happy with our cooperation with Lufthansa Cargo at the Düsseldorf location regarding imports,” says Naheel Wafa Dajany. The ANA Station Manager at Düsseldorf Airport always welcomes the Dreamliner personally out on the apron and supervises the handling of the cargo. “We are confident that we will soon be able to market freight exports to Japan successfully as well,” adds Dajany.

Cooperation in response to challenges raised by the Middle East.

Her counterpart at Lufthansa Cargo is Thomas Dettmer. A German who grew up in South Africa and who has also come to observe the turnaround of the 787 from up close today. The boss of a team of 55 Cargo employees – Düsseldorf is the third-biggest branch of Lufthansa Cargo in Germany, behind Frankfurt and Munich – stresses the strategic importance of the joint venture.

“The air freight market is very competitive. Our competitors among the government backed airlines in the Middle East in particular have increased their capacities massively, and they are continuing to do so. The reason behind this move is a strategy designed to come to fruition once the oil era comes to an end. In a highly regulated market like the one here in Europe, we do not have the option to boost our capacities in the same way.

This makes this cooperation with a top partner like ANA a very good alternative for strengthening both capacities and the network, and to provide the customers with an even better service without having to operate all these services ourselves.”

Crews and equipment move into position even before the airplane comes to a halt. A tanker carrying 60,000 liters of kerosene is already in attendance. 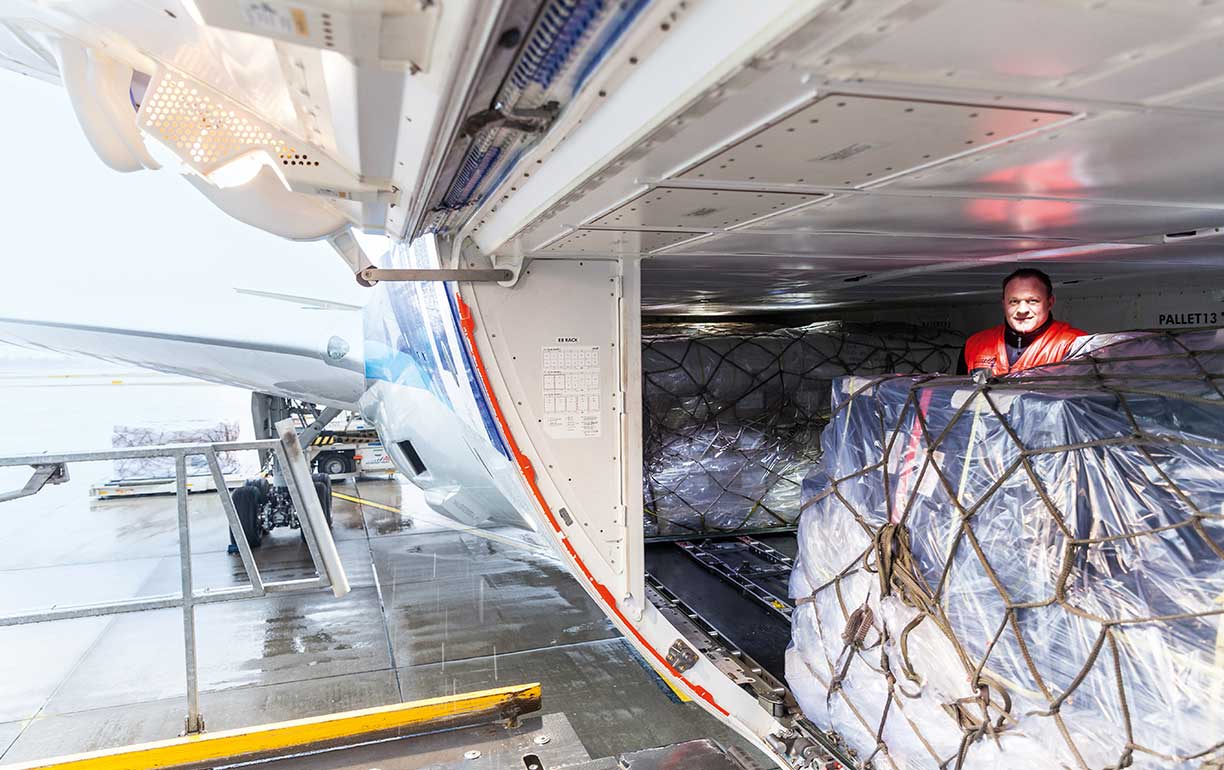 The Boeing 787 will only stop here for a few hours.

As the passengers exit the Dreamliner via the gangway, the belly of the plane filled with numerous containers and airfreight pallets opens up. The cargo consists of a wide variety of goods, from computer components and clothing right through to spark plugs – a total of 469 consignments from both Lufthansa Cargo customers and ANA customers. In addition to 169 passengers, the 787 can carry up to 20 tons of freight from Japan to Germany. The cargo compartment of the wide-bodied plane can accommodate consignments measuring up to 1.60 meters in height. 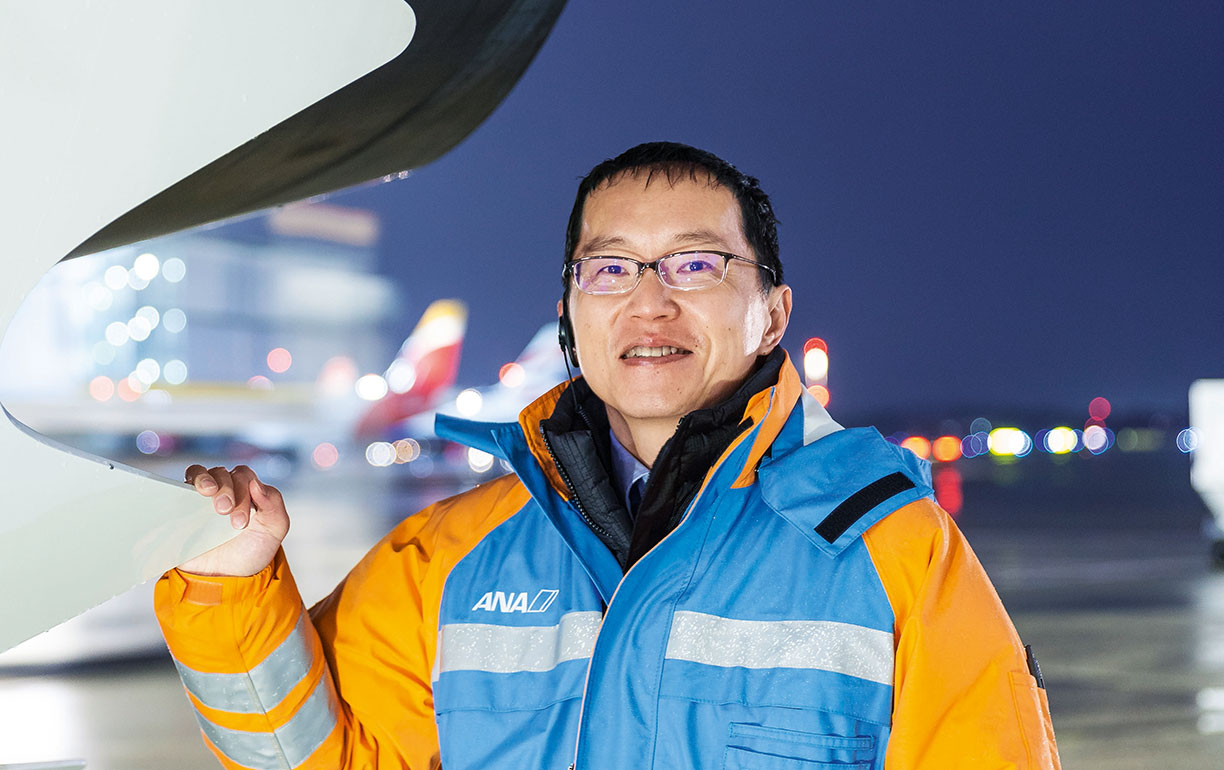 Unloading the cargo does not take long. “Usually we are done within a half an hour,” says Katsuya Fukumoto. He is the Manager Traffic and Operations for ANA in Düsseldorf. In the handling of their own aircraft, the Japanese airline places top priority on ensuring that every move is perfectly coordinated and all activities are carried out on time.

Katsuya Fukumoto watches the workers on the apron very closely as they carefully push the containers and pallets across the roller beds in the belly of the plane and on to the mobile lifting platforms waiting at the cargo door.

Some of the consignments carry the Lufthansa Cargo bar code, others an ANA label. As always, the pallets are packed in such a way that they fit perfectly against the wall of the cargo compartment in their respective locations. Packing airfreight pallets is highly skilled work!

The loading supervisors at Narita also made sure that the individual units were placed at the right locations within the cargo compartment, depending on their weight. “The better the aircraft is balanced, the less fuel it consumes in flight,” explains Katsuya Fukumoto.

The business administration and organizational procedures it takes to carry out such an airfreight operation must be equally well prepared. The start of the joint venture required careful planning: even before the joint venture had the green light, the staff of both partners in Düsseldorf and in other locations in Europe and Japan coordinated their procedures.

Among other things, the IT systems of both Lufthansa Cargo and ANA were optimized and configured so as to ensure that the mutual exchange of data could proceed without a hitch.

The staff also underwent special training, not only in the handling of the new procedures, but also in how to best communicate with each other. 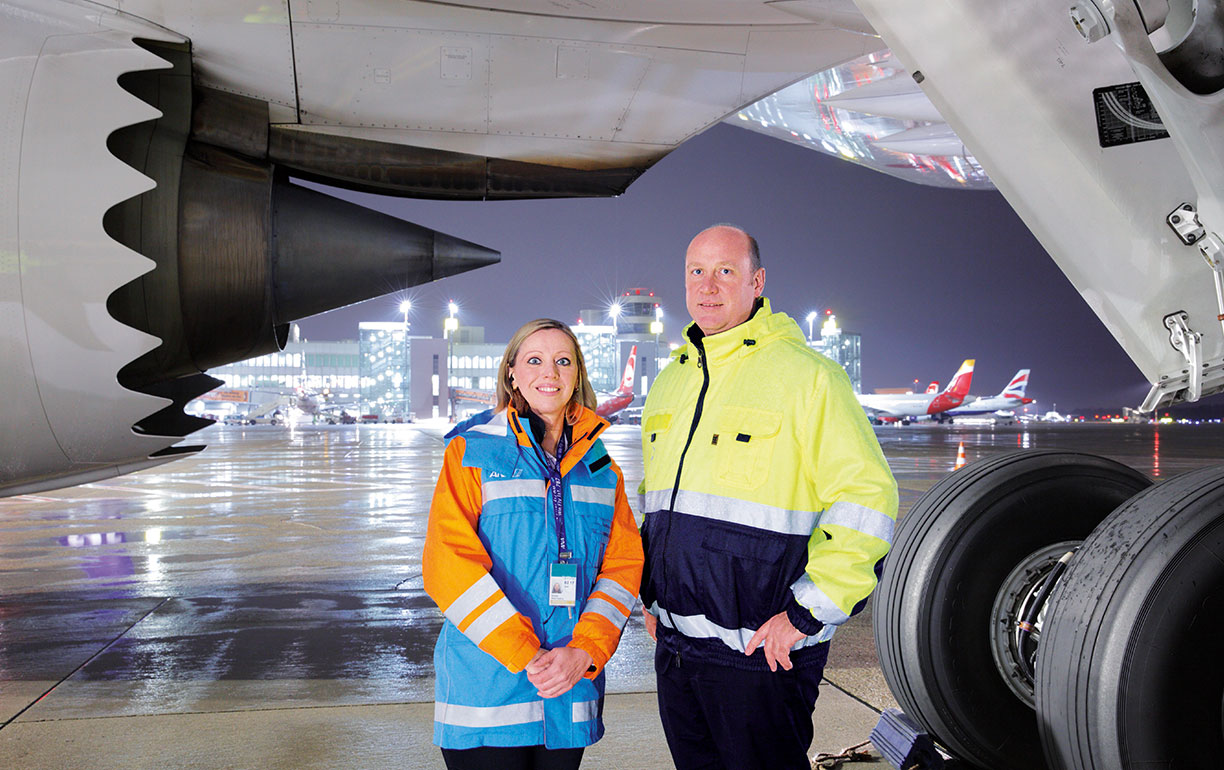 In Düsseldorf the colleagues – competitors in the airfreight business until recently – had to get to know each other first. “We and our colleagues in Japan were given just under three months to implement the joint venture,” remembers Thomas Dettmer. Antitrust approval was granted in September, and the first consignment was under way in December.

“While that particular consignment went from Tokyo directly to London, we here in Düsseldorf are still proud of the fact that we were the pilot station, in a manner of speaking, for the handling of the imports.”Naheel Wafa Dajany, too, underscores the special role the capital of the federal state of North Rhine-Westphalia plays in ANA’s operations in Germany. “Düsseldorf is host to the largest Japanese community in Germany, and it is an important economic center,” said the ANA Station Manager.

“Japanese people like it here along the Rhine, and the city benefits from the resulting cultural enrichment, and of course economically as well. This is evident in the harmonious relationship between the Germans and the Japanese over decades here along the Rhine. For us it serves as a model for our continued cooperation.”ANA Handling Manager Katsuya Fukumoto agrees.

It is not only his work in the joint venture that he enjoys very much: “While the domestic markets of the two companies may differ greatly, they are united in their strong focus on quality, safety and customer satisfaction. For this reason they make the perfect partners!” Privately Katsuya Fukumoto also feels very comfortable living in Düsseldorf.

He made sure not to miss the recent Shrove Monday carnival procession through the city. And he also gets to play his favorite sports. He already took part in the softball tournament organized by the Japanese community in Düsseldorf twice a year. “I could see one of our airplanes flying overhead while I was on the court,” recalls Katsuya-san. 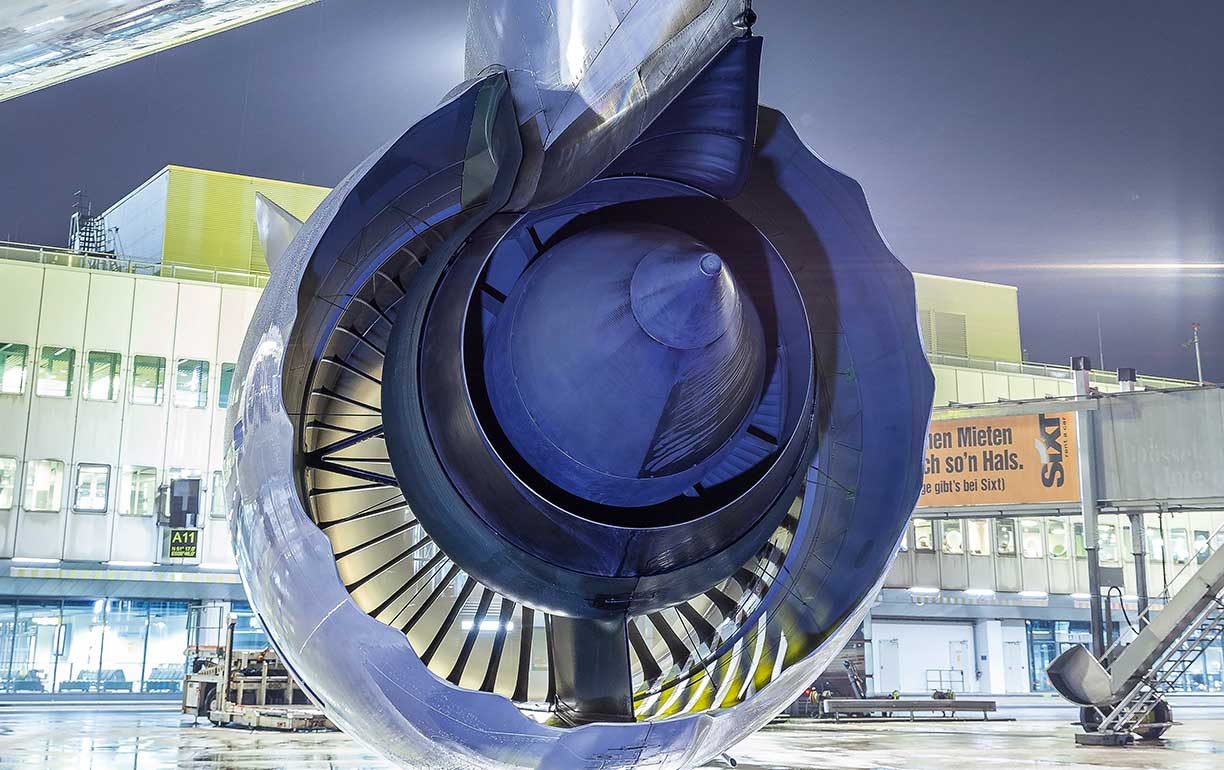 The modern, extremely economical 787 engines made by Rolls-Royce are easily recognized by the serrated edge of the engine cowling. These so-called chevrons mix the hot exhaust gases with the outside air, which results in reduced noise. 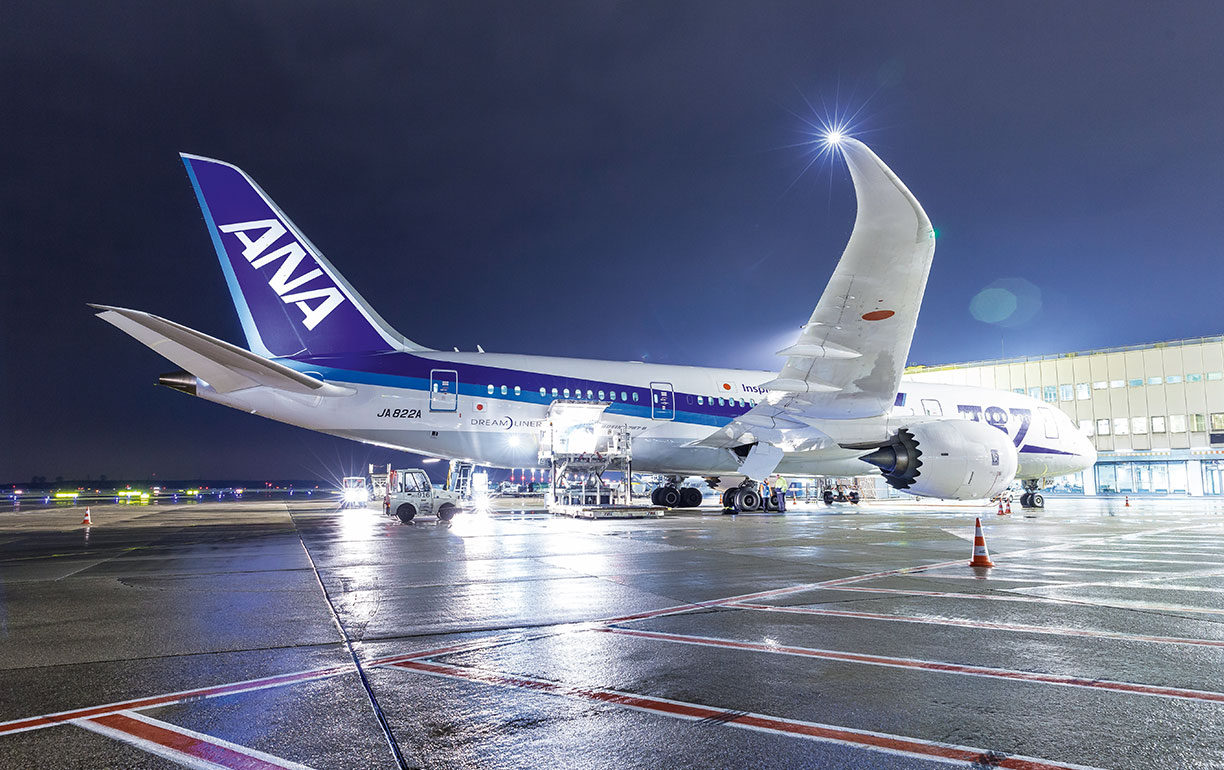 The joint venture between All Nippon Airways (ANA) and Lufthansa Cargo has been in operation since 1 December 2014. Initially, the cargo capacities of both companies on flights from Japan to Europe are being marketed jointly. The joint venture offers customers a denser and more extensive network with more direct flights, more destinations and higher frequencies.

The merging of the freight handling operations of the two companies at central locations, such as the airports at Tokyo-Narita, Tokyo-Haneda and Nagoya in Japan and Düsseldorf, Munich and Frankfurt in Germany, benefits local customers directly in the form of shorter routes. Added to this is the saving in time, as customers delivering their consignments only need to access a single freight-handling point.

Joint marketing of cargo space from Europe to Japan will commence in summer. In addition to the modernization of the existing fleet of five Boeing 777 Freighters, the complete rebuild of the IT system and the planned new cargo center in Frankfurt, the development of feasible cooperative ventures is an integral part of the “Lufthansa Cargo 2020” strategy. In terms of revenue, ANA is the eighth-biggest airline in the world, and Japan’s biggest airline in terms of passenger numbers and freight volume.

The company currently employs a workforce of 14,000 worldwide, and its fleet of 235 aircraft flies to 187 national and international destinations. ANA recently repositioned its freight arm, ANA Cargo. Focussing on sales, marketing and freight handling, the company is set to expand with its ten Boeing 767 Freighters from the air freight hub Okinawa. 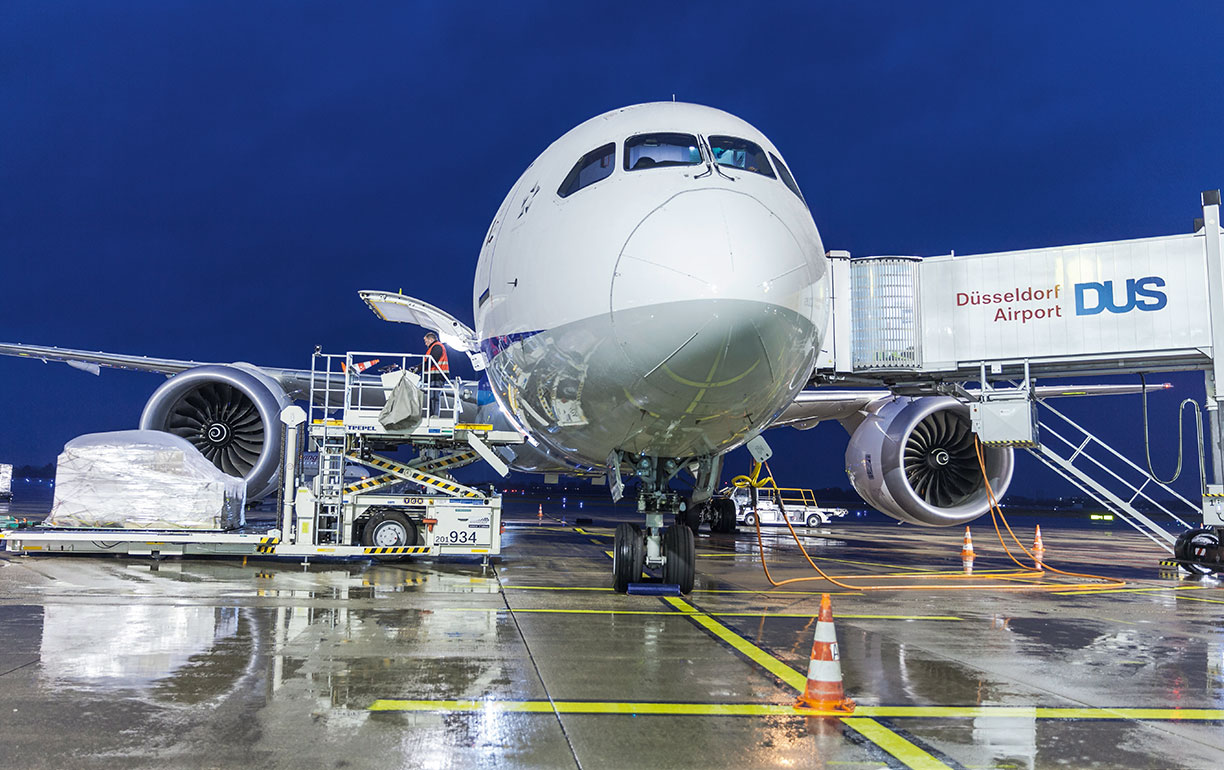 The 787 is a long-distance aircraft made by U.S. manufacturer Boeing. It is currently being operated in two separate versions of different lengths: the 787-8 and the 787-9. A 787-10 version is on the drawing board. The fuselage of the twin-jet Dreamliner is made of carbon fiber-reinforced plastic composites.

The use of the composite materials lowered the weight of the Boeing 787 by 20 per cent compared to other aircraft of the same size. In addition, improved aerodynamics resulted in a further reduction in kerosene consumption compared to its predecessor, the Boeing 767. The CO2 emissions of the Dreamliner are 20 per cent below those of similar type of aircraft.

Moreover, the 787 can be operated using a new, environmentally friendly fuel consisting of 85 per cent kerosene and 15 per cent biodiesel. The first 787 was delivered to ANA in April 2011. The airline placed an order for a total of 80 Dreamliners with Boeing, making it the biggest fleet operator for this type of aircraft. The 787-8 configuration currently servicing Düsseldorf can carry up to 169 passengers and 20 tons of freight.