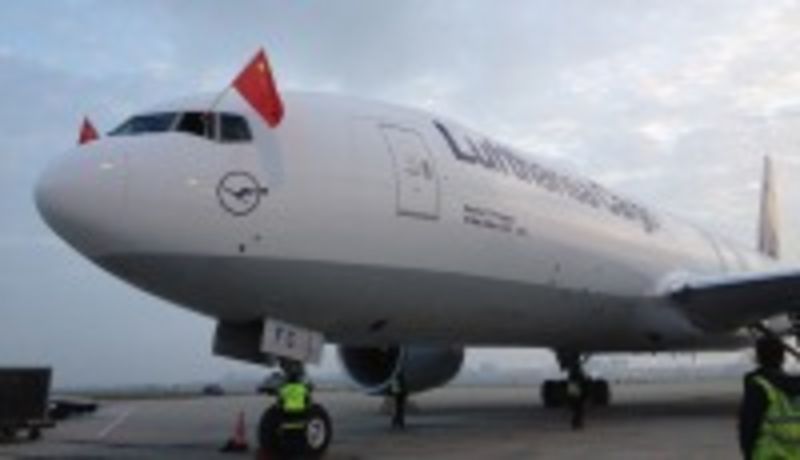 A new destination for Lufthansa Cargo’s Boeing 777F: the brand-new freighter is heading for Shanghai Pudong Airport since last week as well. It has become the first city in the global route network of Europe’s leading cargo airline that is served with daily flights by the new “Triple Seven”.  “We are strengthening our position in China considerably through the use of the best freighter in its class”, emphasised Christian Haug, Regional Director North & Central to more than 100 representatives of the logistics industry in Shanghai. “The Triple Seven is already setting standards in reliability and other areas in just the first few months since we introduced the new aircraft model. With the new aircraft, we are continuing to invest for our customers in our dense, high-frequency network.” Shanghai is Lufthansa Cargo’s largest freighter station in the global route network. With the arrival of the third “Triple Seven”, the fleet is now big enough to allow the company to serve this long-haul route daily with the new freighters.  As a sign of the special ties with China, the Boeing 777F bearing registration D-ALFC was christened “Ni Hao, China” (“Good Day, China”) on arrival in Shanghai. The idea to give the aircraft this name originated from the winning submission to a creative public competition held by Lufthansa Cargo to find a naming convention for its entire fleet in advance of the arrival of the B777. From the more than 40,000 potential aircraft names submitted to Lufthansa Cargo within six weeks, a jury with the involvement of the full Cargo Board opted for the central theme to “Say hello around the world”.  Lufthansa Cargo has traditionally held a strong position in China. Freighters and Lufthansa Passenger aircraft currently fly to a total of nine cities on the Chinese mainland and in Hong Kong and Taiwan. The cargo airline offers its customers more than 2,200 tonnes of freight capacity to the European hub per week. The two handling companies which Lufthansa Cargo operates with Chinese partners in Shanghai and Shenzhen are also very successful.