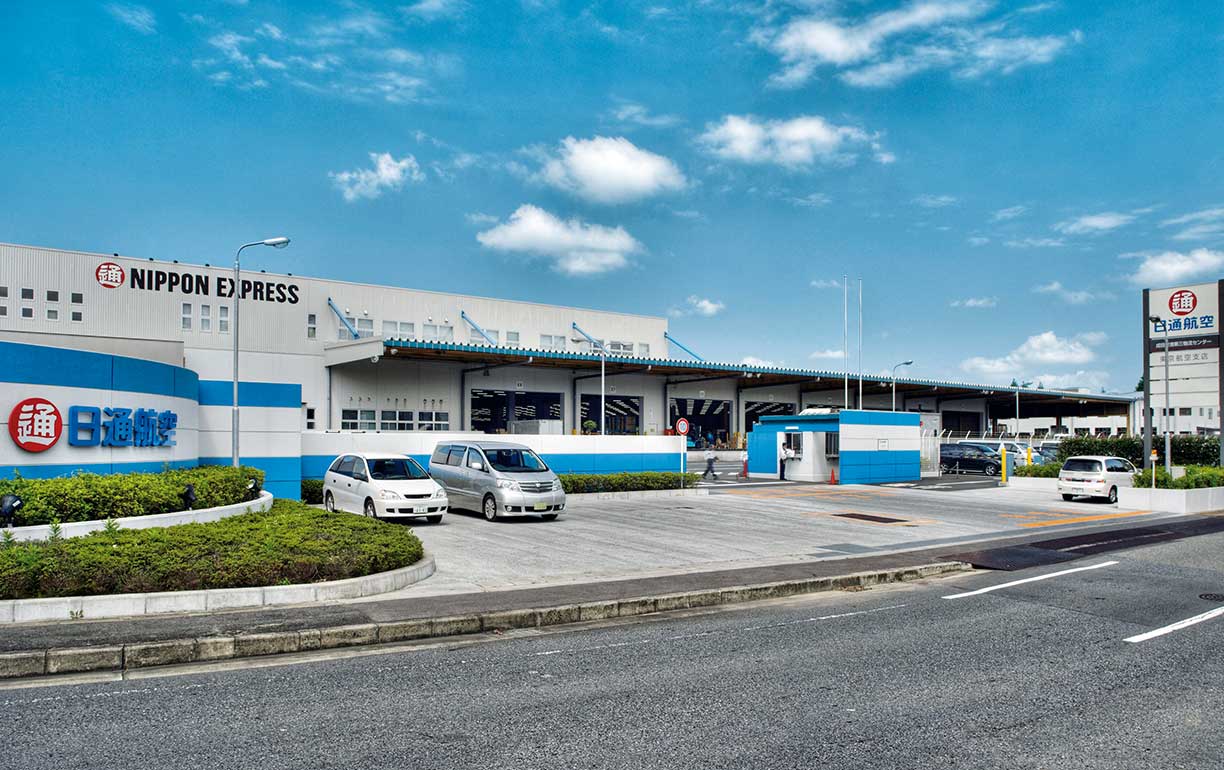 Japan is pushing the pace. The airfreight industry of the world’s third largest economy is catching up with international growth. This can also be felt at Nippon Express. The second biggest freight forwarder in the world has been a Global Partner of Lufthansa Cargo since April 2005.

Clean, bright, secure and with state-of-the-art technology – that is how the four warehouses of Nippon Express in the immediate vicinity of Tokyo’s Narita Airport present themselves. Anyone who has the privilege of being taken on a guided tour through the entire 90,000 square meters of the big cargo terminal of the major freight forwarder cannot help but gain this impression – which, by the way, is typical for Japan. 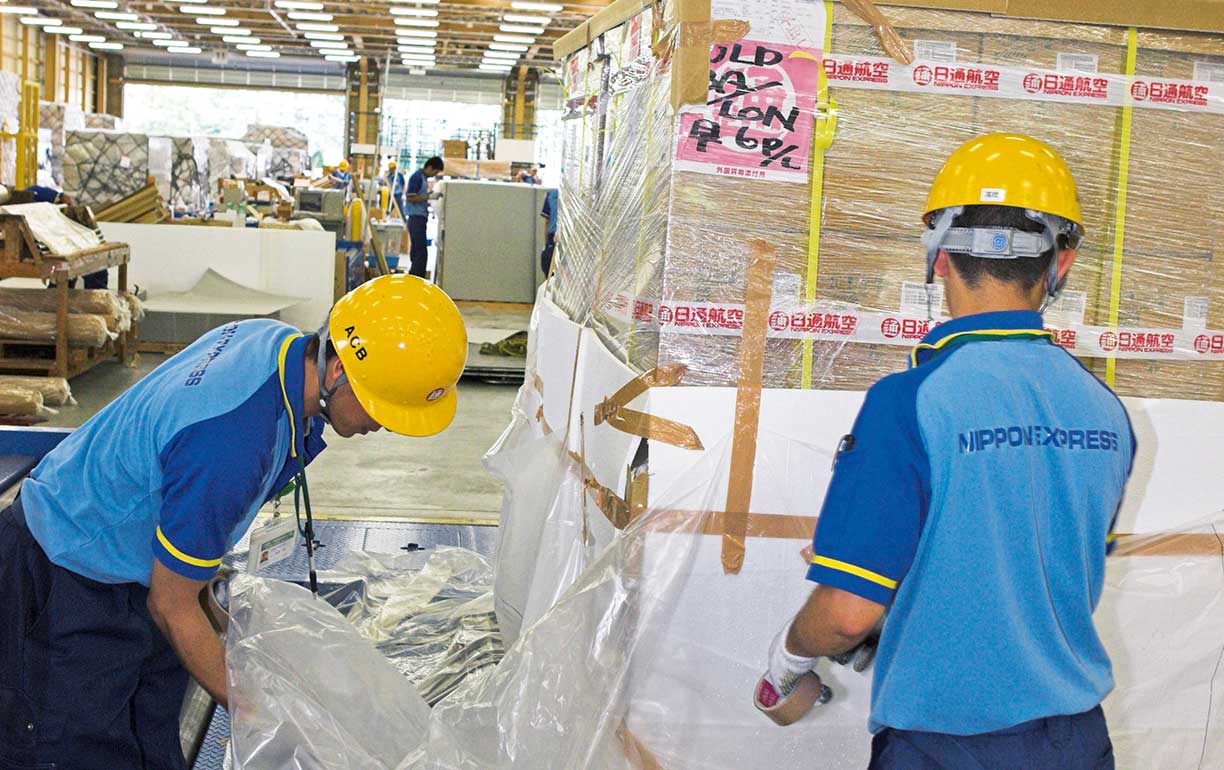 In the export warehouse, dozens of teams are busy emptying the four-axle trucks with tiltable panels on the sides that are common for Japan. Then they check the shipments and build up the pallets. Up to 600 tons of airfreight per day are sent all over the world from this one hall alone. 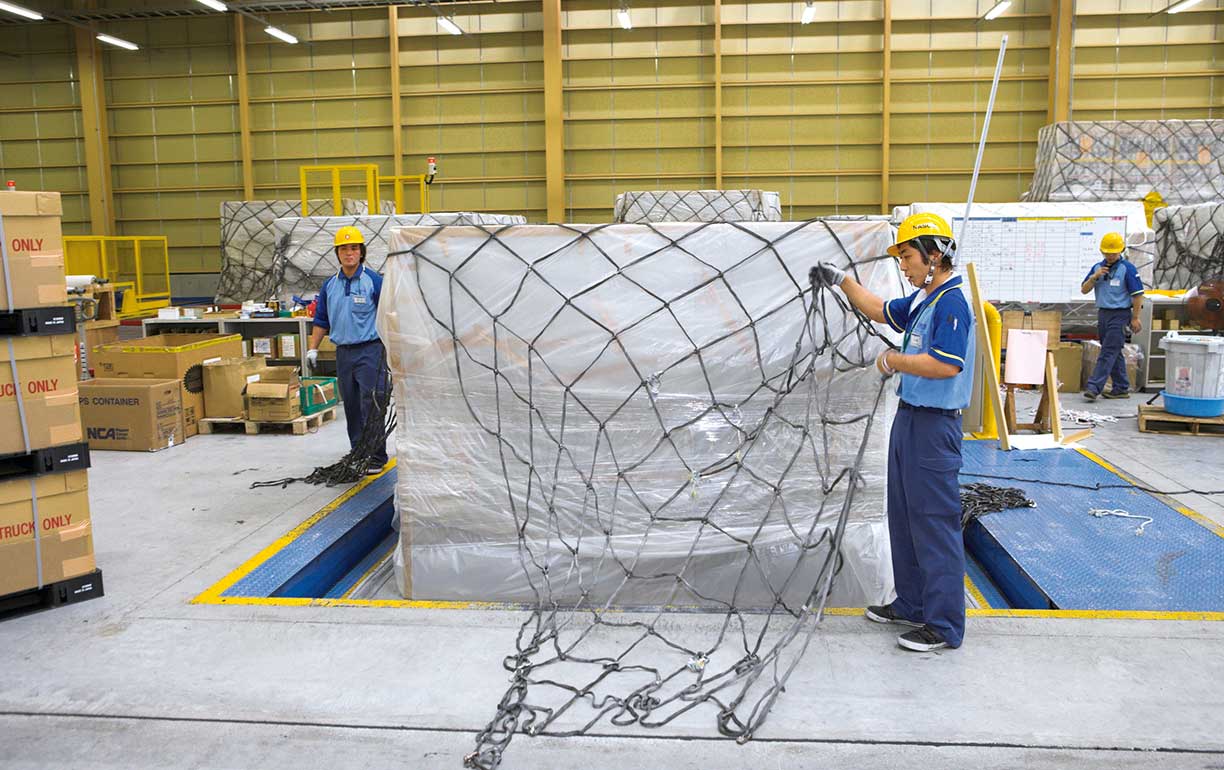 There are special ramps for shock-sensitive goods, and 30 percent of the Nippon Express shipments now leave Narita packaged on the basis of the Bulk Unitization Program (BUP). The BUP pallets are previously built up on the lowerable work platforms. This spares the pallet builders unnecessary climbing and speeds up the build-up as well as the pack­aging process.

Every step is monitored by foremen as well as cameras. Not only for security reasons (everything in the export warehouse is certified in accordance with TAPA A regulations), but also because of the better error clarification. For if anything does happen to be wrong with a shipment some time, the video images stored for one month can be scanned. They show whether everything was carried out properly during the pallet build-up and whether the error may have occurred in the warehouse or elsewhere. 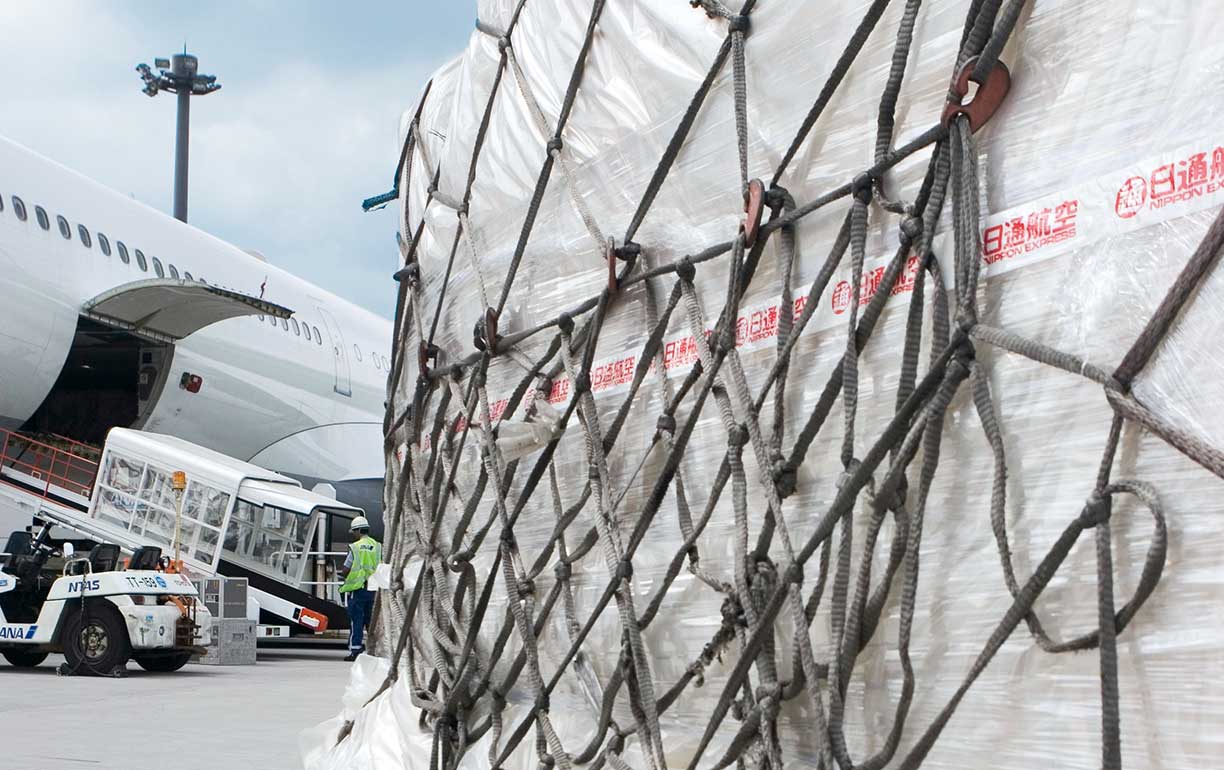 It is this will to perfection and the readiness to give every customer the best – and to do so worldwide – that has made Nippon Express big. In the IATA world ranking, the company from the country with 127 million inhabitants is in second place.

Contrary to many of its competitors, Nippon Express does not focus primarily on high-tech “Made in Japan”, but, to an equal extent, on all branches of industry. “We want to offer our customers one-stop shopping,” says Shinjiro Takezoe, outlining the strategy. 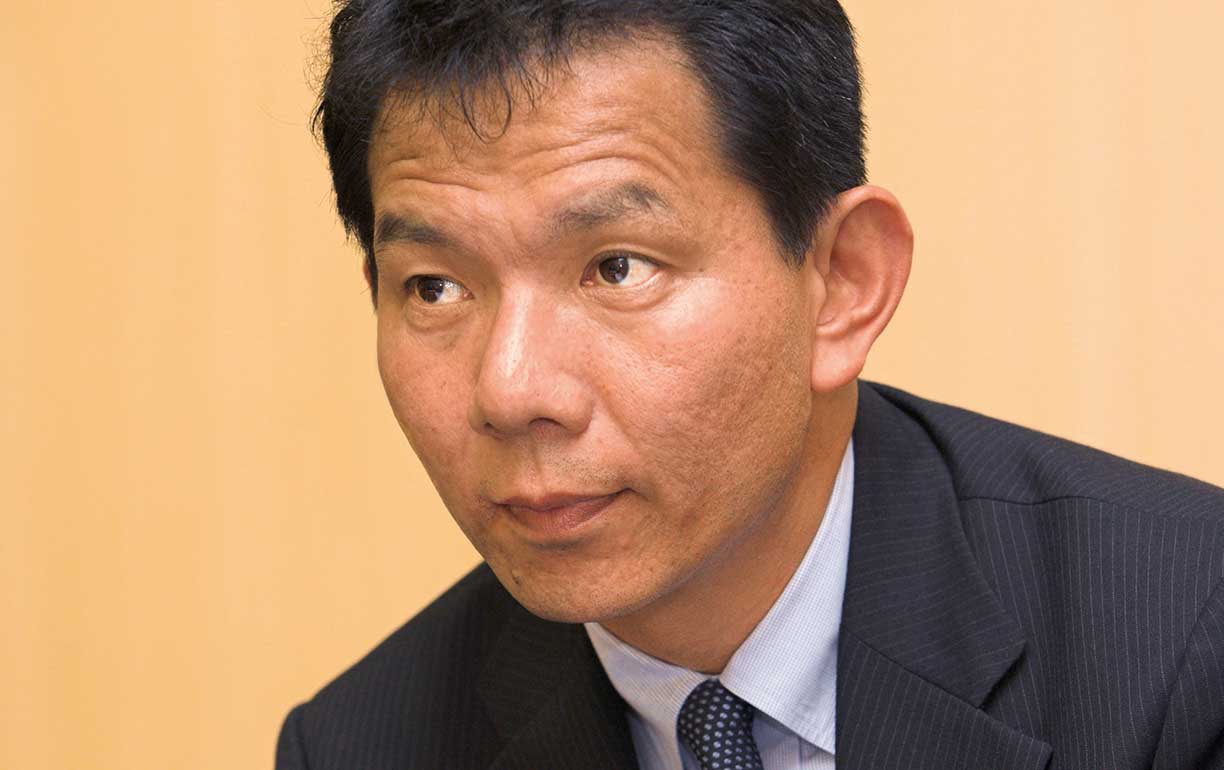 As Manager Marketing Sales Promotion at the Cargo Division of Nippon Express, he is in charge at a global level for collaboration with the airlines. “Service quality is particularly important to our company and its customers, and this is something we share with Lufthansa Cargo,” Takezoe adds.

He and his team played a major part when Nippon Express was the first Asian forwarder to become a “Global Partner” of Lufthansa Cargo in April last year. The aim of the Global Partnership Program is to grow together, to create synergies in sales, to reduce transaction costs, and to drive progress in areas of key importance, such as, for example, the automation of business processes. 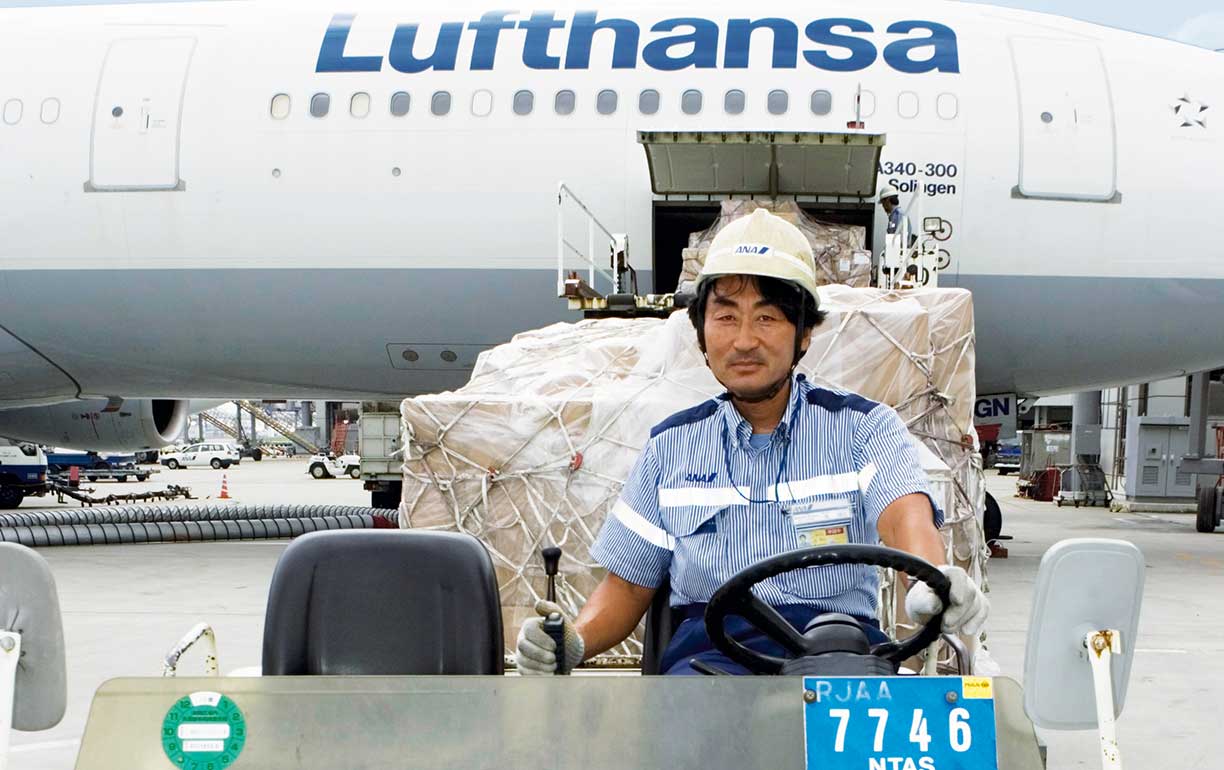 “In Japan, the collaboration between Nippon Express and Lufthansa Cargo has always been very close and the volume of business quite large,” Takezoe explains. “Yet since we have been a Global Partner, our business with Lufthansa Cargo has also been given a clear boost in the other countries, too. This relates to the better access to the capacities, which our branch operations that are located outside of Japan are now receiving.”

The significance of airfreight as a whole in the business success of Nippon Express is growing. The group has 38,000 employees worldwide. A total of 7,000 people work in the sea and airfreight segment, of which around 4,000 are in the aircargo business.

“Airfreight is becoming increasingly important for us, as the demand for logistics services at home is growing nowhere near as quickly as in the international airfreight industry,” Takezoe explains. 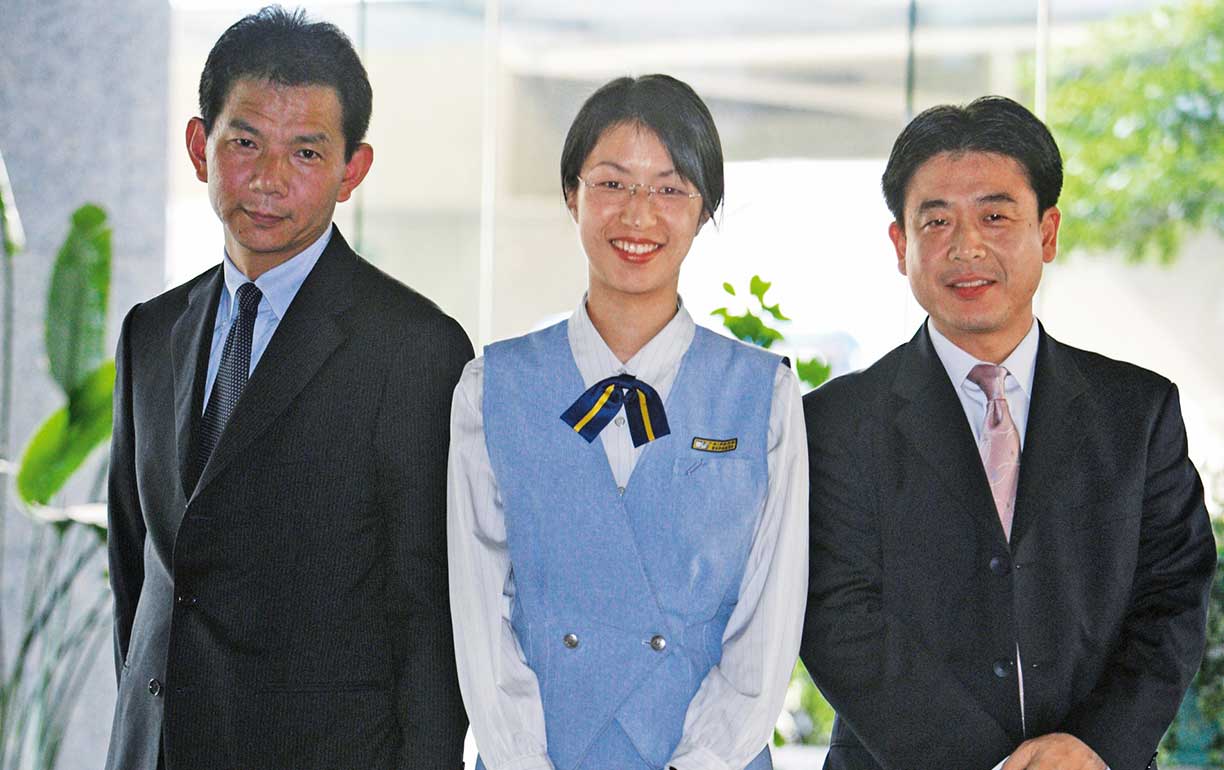 This development also forms the background for the most recent restructuring of the internal organization of Nippon Express: whereas the various regions used to constitute their own departments, today, with the exception of China, the individual functional divisions, such as “Marketing”, “Planning & Sales Promotion” or “Forwarding”, are responsible for supra-regional – in other words, worldwide – customer care. “Through this new organizational structure, Nippon Express is now much better deployed to respond to the global challenges of our customers,” says Takezoe. “The intensified cooperation with a global airline such as Lufthansa Cargo is also, of course, helpful in this respect.” 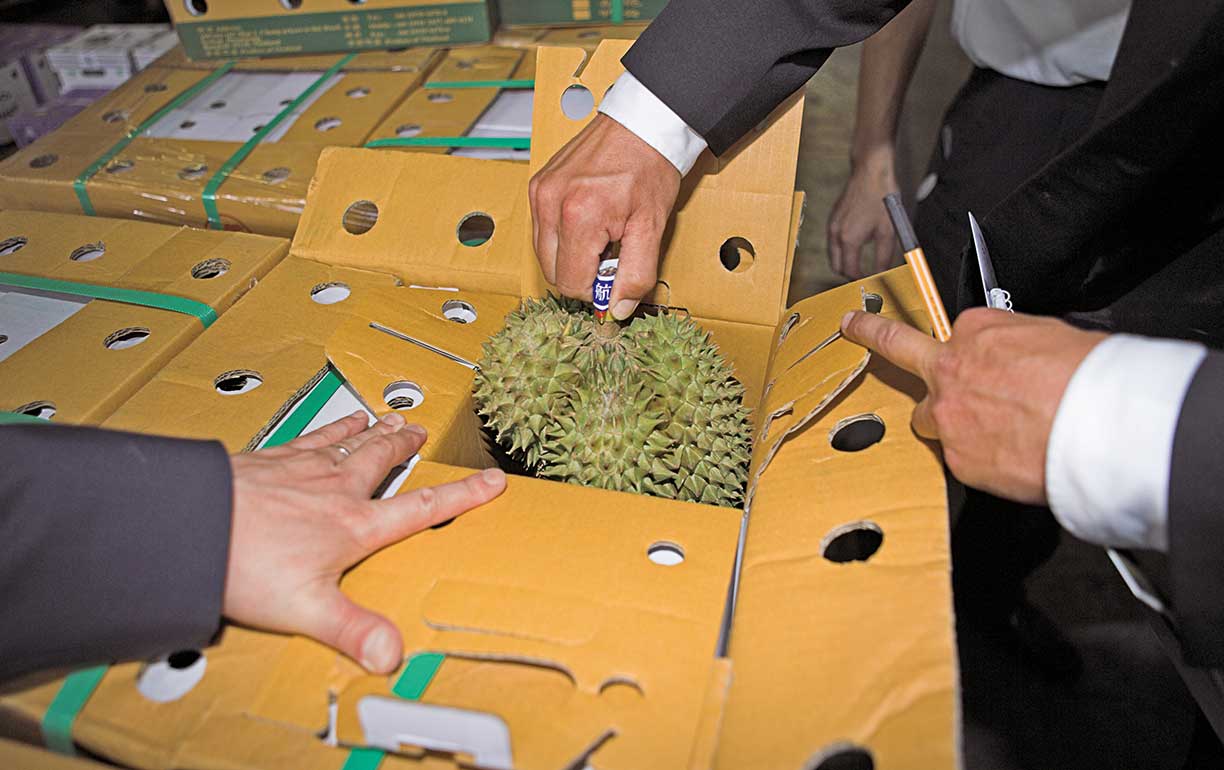 In 2005, Nippon Express had a 21.3 percent market share in the Japanese airfreight industry – but the medium-term goal is 25 percent! “Despite the good growth forecasts for airfreight, a global logistics service provider today can only achieve a satisfactory return with a correspondingly large share of the market,” Takezoe points out.

Yet even though the competition has become more intensive, Nippon Express looks optimistically to the future. One major reason for this is the recovery of the Japanese economy. For years, the news from there tended to be rather sobering: dwindling gross domestic product, rising unemployment figures – and that in a country, which was able to look back on almost 40 years of full employment!

The central bank tried unsuccessfully to fuel growth and to revive the willingness of Japanese companies to invest. The usual government economic policy recipes, however, failed to help.

The renowned economist Richard Koo from the Nomura Bank explains this as follows in one of his books: during the 1990s, Japan had experienced a strong decline in asset prices. This had created a situation in which many companies were suddenly confronted with balance sheet showing heavy debts. Consequently, numerous decision-makers in the Japanese economy set themselves the goal during the subsequent period of primarily minimizing debts.

This was poison for the economy’s development. Most managers felt that investments and a long-term oriented growth strategy would not enable them to get to grips with the debts. The result: lack of investments, hardly any demand for loans, growth at a standstill.

In the meantime, however, the Japanese have worked their way out of this trap. Deflation appears to have been stopped, prices are increasing moderately, and the economy is inclined to invest again on a larger scale. This is also impacting the Japanese airfreight industry.

According to current forecasts, its growth will no longer lag appreciably behind the international industry average during coming years. “During the recession, many shippers contented themselves with sea freight,” Takezoe explains.

“Now, many customers are again using the much faster airfreight to give their business an additional boost and to resolutely grasp growth opportunities.”

Furthermore, airfreight business is stimulated by the growing requirements on the part of the shippers:

“Today’s markets are changing very quickly, and that plays into the hands of airfreight flexibility,” says Takezoe. “Take the example of flat-screen monitors: no-one could foresee that such a tremendous demand would develop among consumers within such a short time. Our business has benefited enormously from this boom, since the production machinery, many parts, but also the products themselves were and are shipped to a large extent as airfreight.”

Another example for the positive development of the Japanese airfreight industry is temperature-controlled transportation (for more on this see text on page 21). Takezoe is convinced, therefore, that the current recovery of the economy is not just a temporary phenomenon.

“We Japanese benefit from our high level of technology. What is more, we are still willing to work very hard to safeguard our economy’s international competitiveness.” 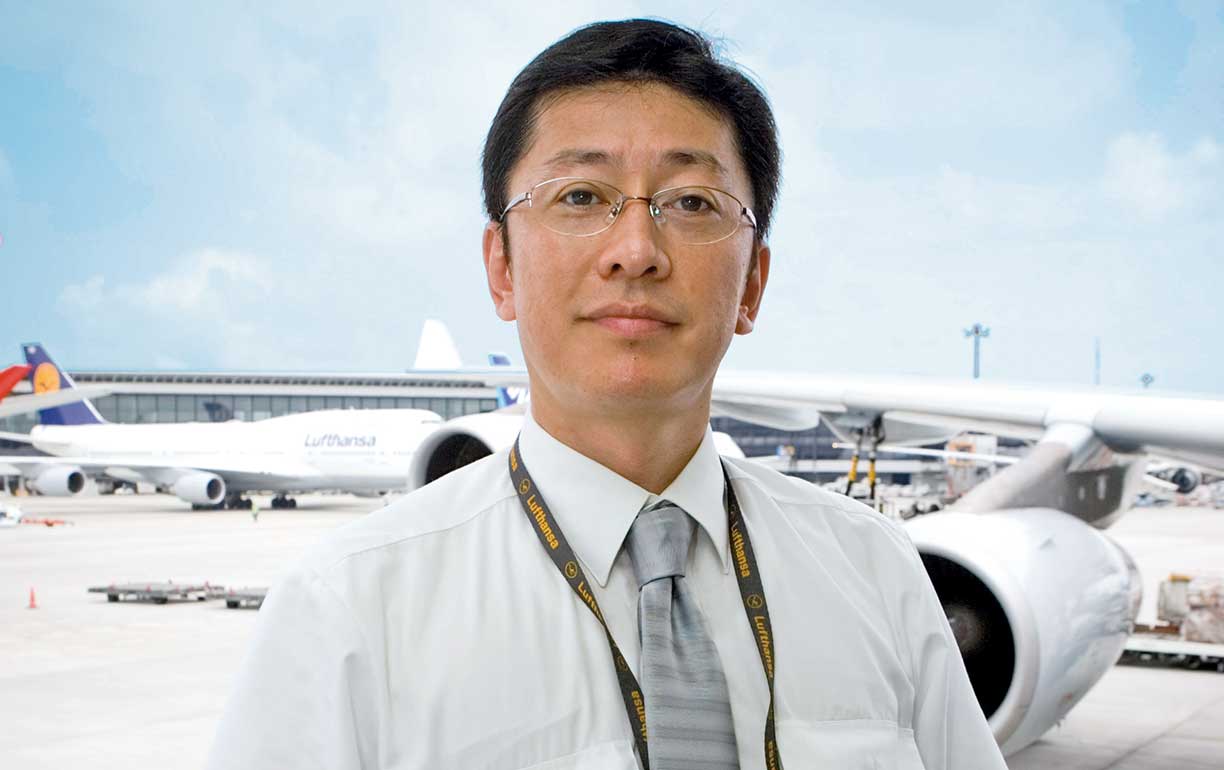 With 2.29 million tons of airfreight in 2005, Tokyo’s Narita Airport is, according to “AirCargo World”, Number 4 in the world ranking. Located one to one-and-a-half hours’ traveling time from the city center, up to two dozen big freighters can often be seen here simultaneously.

Alongside the local airlines JAL Cargo and ANA, the U.S. carriers and the integrators are par­ticularly strongly represented. Annually, 968,000 tons of airfreight are imported and 840,000 tons exported.

Nippon Express is represented with four modern cargo terminals, including a perishables center, in the immediate vicinity of the airport. The company exports about 23,000 tons and imports 16,000 tons of airfreight a month. Over half of the shipments are transported to other Asian countries or come from there. The European and American markets account to almost equal extents for the other half. 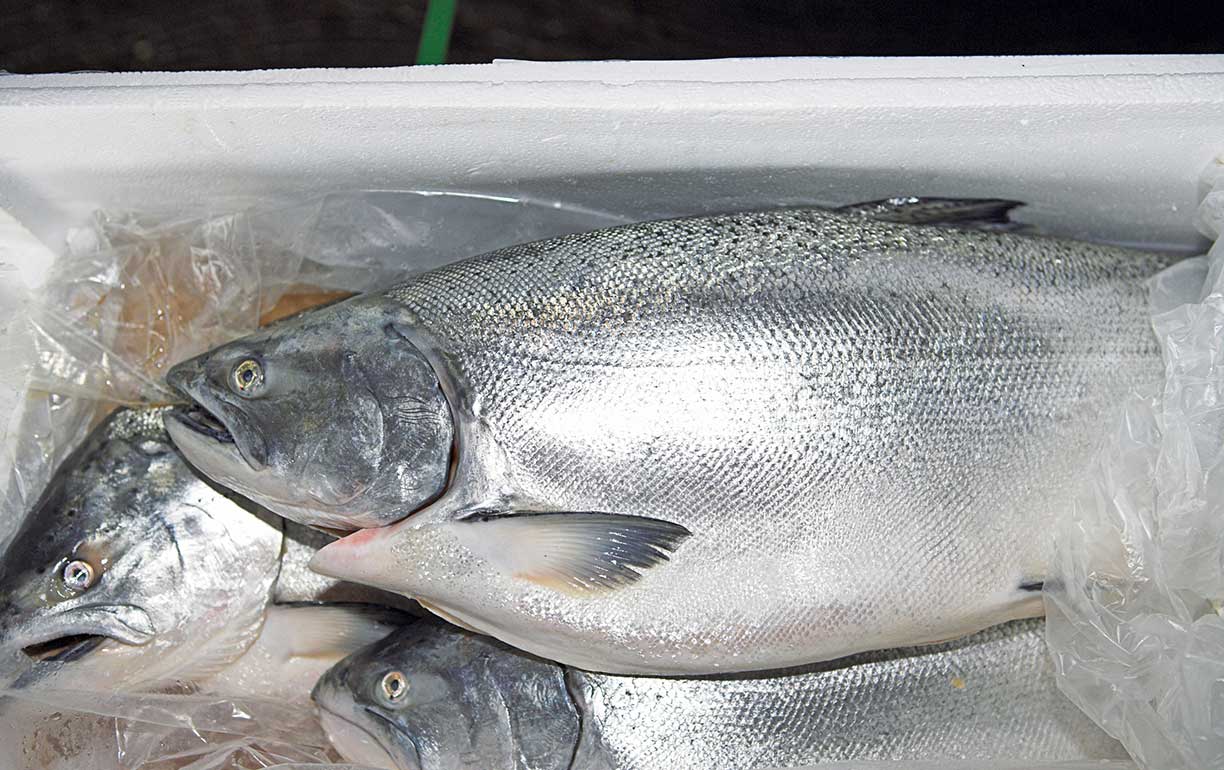 Nippon Express aims to grow strongly in the segment of temperature-controlled transportation and builds here on close cooperation with Lufthansa Cargo – pharmaceutical and high-tech products are also becoming more important.

The most beautiful creatures of the sea end up in the cold-storage warehouse of Nippon Express at Narita: Pacific tuna fish, for example, as big as full-grown domestic pigs, or huge salmon from New Zealand or Norway. 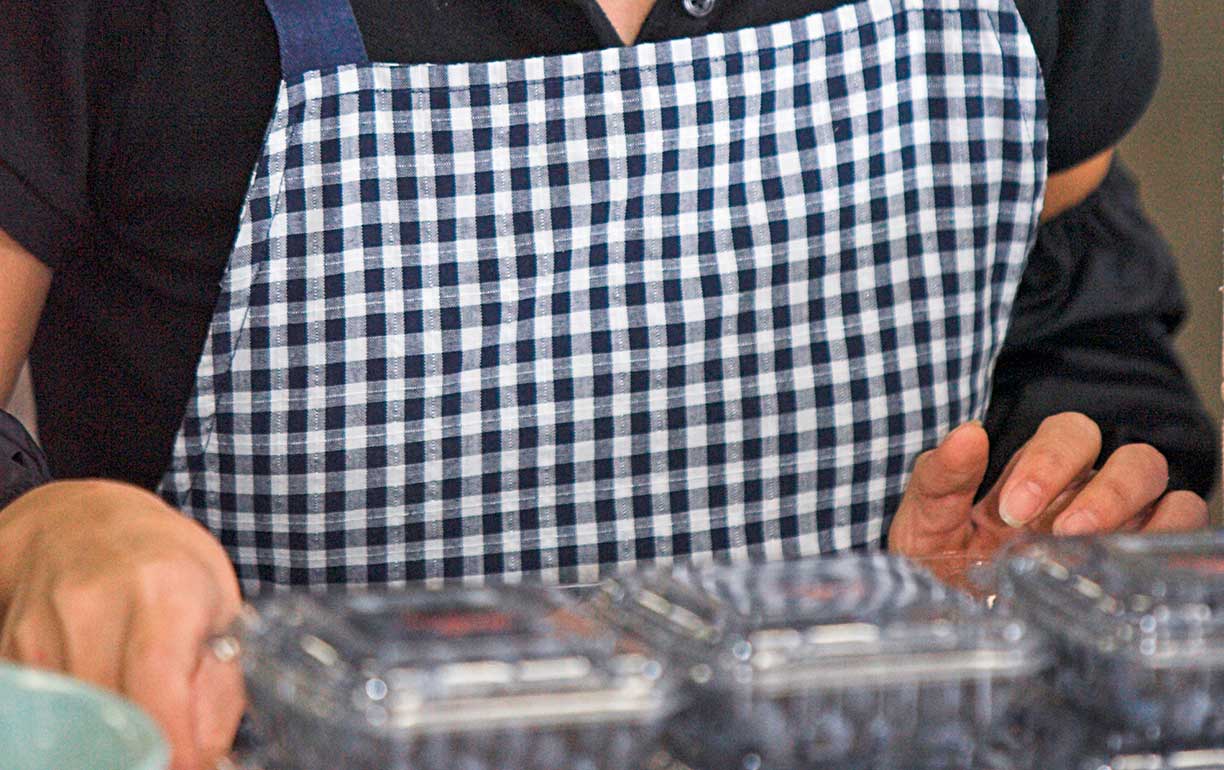 Many wholesale buyers come directly to Nippon Express at Narita and decide there which goods should be earmarked for which market in Japan. The best, of course, make their way to the most expensive gourmet temples of the metropolis of Tokyo with its 17 million inhabitants. To ensure that the precious goods stay fresh, up to 30 tons of ice can be produced at the 11,000-square-meter perishables center of Nippon Express, explains Ryuichi Kato, Nippon Express Manager at the Perishables Cargo Distribution Service Department, during a walkaround.

Yet there is even more to offer here: in the temperate rooms, for ex­ample, where the humid Japanese summer climate is unable to penetrate, not only fish is handled, but also precious fruit and flowers are processed, including quality control.

Nippon Express stores – depending on the customer’s requirements – in the deep-freeze range as well as between 3 and 20 degrees centigrade. Furthermore, in the case of high-value fruit, such as, for example, fine mangoes, if the ripening process has to be stopped, special warehouses are also available, in which the oxygen has been removed.

The market for temperature-controlled goods in Japan is currently import-driven. “Only recently, the government eased the import restrictions for certain perishables,” explains Katsuhito Kobayashi, Manager Planning & Sales Promotion at Nippon Express. “The demand is enormous, and the brokers can obtain very good prices. In the current year, we expect an increase of between 13 and 14 percent!”

Together with the classic perishables, such as fish and fruit, other goods are also becoming more significant for the field of temperature-controlled transportation: pharmaceutical products, certain batteries, highly sensitive precision machinery for the semiconductor industry as well as films need to be transported within a fixed temperature span. “Not only airport-to-airport, but door-to-door. That’s what the customers expect,” emphasizes Masae Tobe, supervisor for the cool chain business at Nippon Express.

In order to further sharpen its profile in this field, Nippon Express has become a member of the Cool Chain Association (CCA), which has developed a new industrial standard for perishables and temperature-controlled goods under the name Cool Chain Quality Indicators (CCQI).

This gives Nippon Express a unique status in Japan, and the company wants this to find its expression in further growth. “The cooperation with Lufthansa Cargo will become increasingly important for us in future,” says Kobayashi. “With the Unicooler, which can cool and heat, Lufthansa Cargo offers a transport container, which can reliably offset the differences in temperature in the plus as well as minus ranges. This is a particularly great help for us in our acquisition of customers from the pharmaceutical and high-tech industry.”