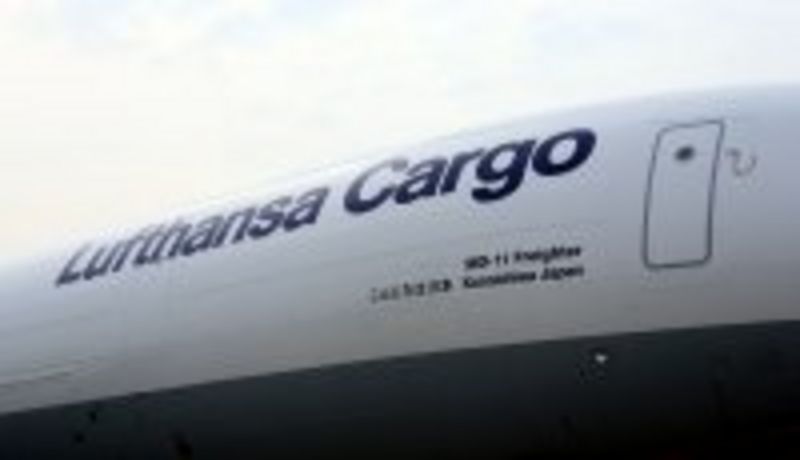 An MD-11 freighter in the Lufthansa Cargo fleet will in future be bearing the name “Konnichiwa Japan” (Good Day Japan) on flights in the carrier’s global network.
The aircraft with the registration D-ALCG, was named by Peter Gerber, Chairman and CEO of Lufthansa Cargo, Dr. Hans Carl von Werthern, Ambassador of the Federal Republic of Germany in Japan, and Tokuhisa Takano, Senior Vice President of Narita International Airport Corporation, at a ceremony at Tokyo’s Narita Airport. In keeping with Japanese tradition, a barrel of sake was ceremoniously opened for the plane to be sprinkled with Japan’s customary beverage.

The freighter has been christened “Konnichiwa Japan”, symbolising the significance of Japan as one of the most important markets for global air freight services.  Peter Gerber, CEO of Lufthansa Cargo, states: “The ‘Konnichiwa Japan’ greeting also illustrates the special bond between Lufthansa Cargo and Japan. Lufthansa Cargo is the market leader of the air cargo business from Japan to Europe.” It has long standing connections with the customers in the air cargo industry since 1961 and grew further with the first freighter operations in 1969.” Lufthansa Cargo is offering today 47 weekly flights between Japan and Europe including the services of Lufthansa Passenger Airlines and Austrian Airlines.

The D-ALCG is the first MD-11 in the Lufthansa Cargo fleet to be named following similar naming ceremonies for four Boeing 777 freighters operated by Europe’s leading cargo airline.

The idea of giving the aircraft this name originated from the winning submission in a creative public competition held by Lufthansa Cargo to find a naming convention for its entire fleet. The key message “Say hello around the world” was chosen by the jury with the endorsement of the Executive Board from more than 40,000 entries with name-the-plane suggestions, which were submitted to Lufthansa Cargo in the space of six weeks.