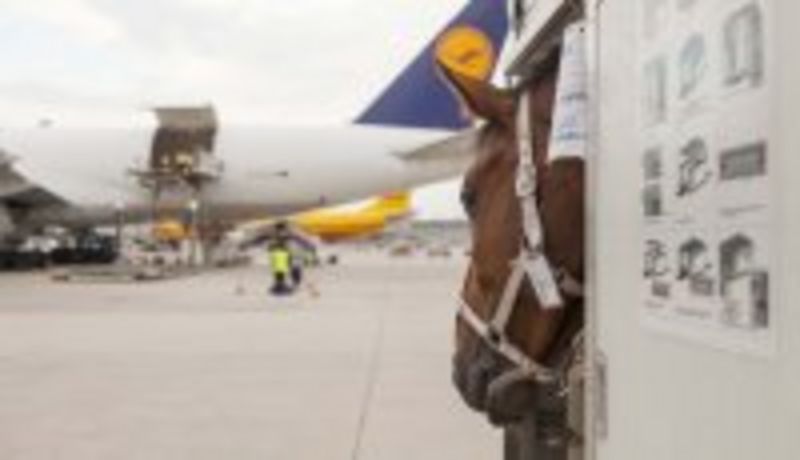 65 horses, 22 mobile stalls, one aircraft. Lufthansa Cargo flew this record-breaking number of quadrupeds from Frankfurt to the Iranian capital, Tehran, on a special flight from Monday to Tuesday night. As the Boeing 777F with flight number LH8350 took off at 10:06 p.m. from Frankfurt, the entire main deck was taken up by horse containers. The modern freighter flown by Chief Pilot Claus Richter was in the air around four-and-a-half hours before safely landing in Tehran.

Hours before, the elegant stud and competition horses had checked in at Lufthansa Cargo’s Frankfurt Animal Lounge and then been accommodated in new horse containers specially designed for such transports. “The bright, friendly interiors make travel more comfortable and the horses are also more willing to enter the unfamiliar containers”, explained Axel Heitmann, who heads up the Frankfurt Animal Lounge. “The ‘sandwich floor' with two plates means these sensitive animals hardly feel the vibrations during loading. At the end of the day, we want our four-legged guests to enjoy the most comfortable transport experience possible.”

This flight was also something special for Christian Nagel, owner of Agricon-Logistic GmbH & Co. KG, the horse shipper responsible for the entire transport: “Even for us, as the market leader in horse transports to the Middle East, a charter flight with 65 horses is always a highlight in daily operations. We planned the transport meticulously with Lufthansa Cargo over several weeks.”

The experts from Agricon-Logistic and Lufthansa Cargo had to take numerous factors into account. The mares and stallions were kept separate so as not to cause unnecessary stress during the flight. The female animals were placed at the rear of the aircraft, while their male counterparts were kept to the fore of the deck.

Professional horse attendants from Agricon-Logistic and a vet also travelled on the flight to ensure the horses’ safety and comfort. The vet and care staff have access to their charges at all times during such a flight so as to replenish water and hay supplies and, of course, dole out affection.