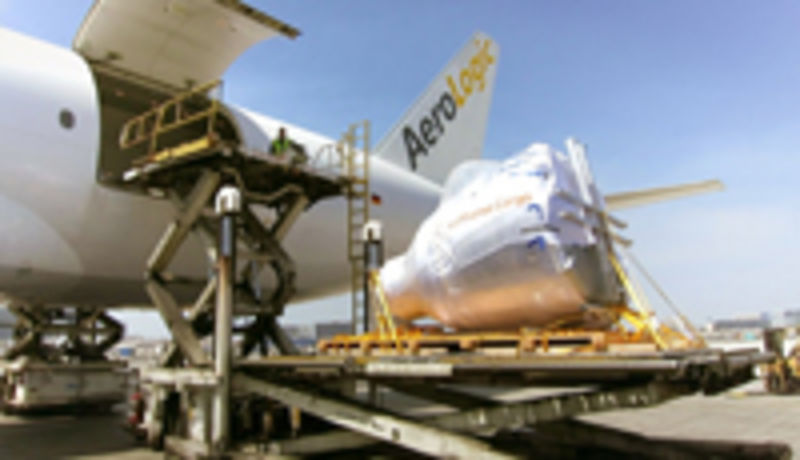 From air freight to space freight - Lufthansa Cargo flew the Red Bull “Stratos” space capsule from Los Angeles to Frankfurt at the weekend. In October 2012, Austrian extreme sport legend Felix Baumgartner jumped out of this very capsule from a height of almost 128,000 feet. In collaboration with the “Schaefer Trans Inc.” transportation company, the flying machine was moved on a flat-bed trailer from the facility of the “Sage Cheshire Aerospace” manufacturer in the Californian desert to Los Angeles International Airport (LAX). The 1.45-tonne capsule was then reloaded onto a Boeing 777F of AeroLogic, a joint venture between Lufthansa Cargo and DHL Express.

Following the transatlantic flight to Frankfurt, the space capsule was reloaded onto a special flat-bed trailer and transported to Salzburg. The capsule and the spacesuit worn by Felix Baumgartner will be displayed alongside other flying machines and sports cars in Hangar-7, Red Bull's own aircraft museum in Salzburg Airport, in the future.

The safe transport of the space capsule was the main concern of Arthur Thompson, Project Manager and CEO of manufacturer Sage Cheshire Aerospace. “The biggest challenge is getting such a big object to its destination in one piece”, explained Thompson. “Thanks to our many years of experience with vehicle prototypes built by us and shipped to Europe with Lufthansa Cargo, I know that the company is very well equipped to handle large, heavy and especially irreplaceable cargo.”

Austrian Felix Baumgartner ascended into the stratosphere in the space capsule on 14 October 2012 with the aid of a helium balloon. From a height of 24,214 miles, he free fell towards the earth at speeds of up to 843.6 mph, setting multiple records in the process. Besides achieving the record for the highest altitude jump, Baumgartner was also the first person to break the sound barrier in a free fall. The jump was broadcast live on various media channels and on television worldwide and is considered one of the most successful marketing campaigns of all time.