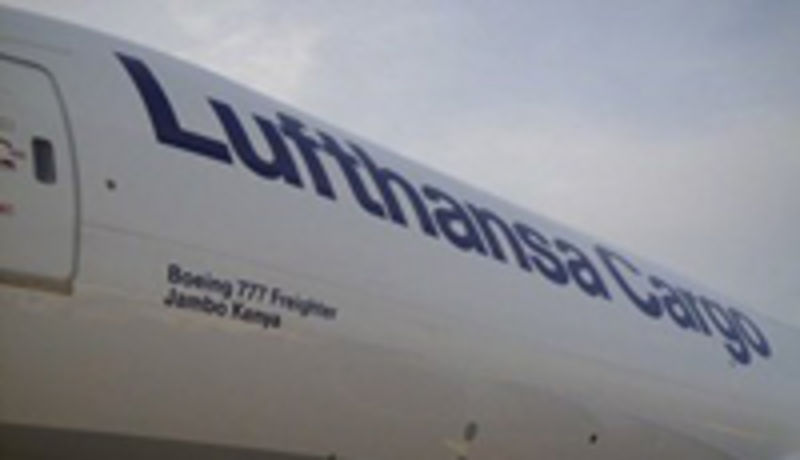 Just one week after a Lufthansa Cargo Boeing 777F made its maiden commercial flight, the second brand new "Triple Seven" in the Lufthansa livery has now arrived safely in Frankfurt as well. The Boeing 777F with the D-ALFB registration landed at Lufthansa Cargo’s home base on 27 November at 5:49 a.m. local time. The new aircraft has been christened “Jambo Kenya” (“Hello Kenya”), symbolising the significance of Africa as one of the most important growth markets for global air freight services. Lufthansa Cargo already flies to four destinations within the emerging continent at the moment.

The idea to give the aircraft the greeting “Jambo Kenya” originated from the winning idea in a creative public competition held by Lufthansa Cargo to find a naming convention for its entire fleet in advance of the arrival of the 777. From the more than 40,000 potential aircraft names submitted to Lufthansa Cargo within six weeks, a jury with the involvement of the full Cargo Board opted for the central theme to “Say hello around the world”. Accordingly, all freighters in the Lufthansa Cargo fleet – both Boeing 777Fs and MD-11Fs – will henceforth be christened with greetings in more than 20 customary languages.

The “Jambo Kenya” greeting also illustrates the special bond between the air freight carrier and Nairobi. Lufthansa Cargo not only flies four times a week to Kenya’s capital, but is also deeply socially rooted there. The Cargo Human Care aid project set up in 2004 by MD-11F fleet chief Fokko Doyen has been supporting orphaned children in Nairobi for years and providing medical assistance day after day with the cooperation of doctors from all over Germany.

The second Boeing 777F will make its maiden commercial flight to Chicago on 6 December. By investing in five brand new Boeing Triple Sevens as part of the Lufthansa Cargo 2020 future programme, the cargo airline is not just focusing on modernisation but also growth. Each of these freighters can carry up to 103 tonnes of freight, transporting it non-stop for more than 9,000 km.