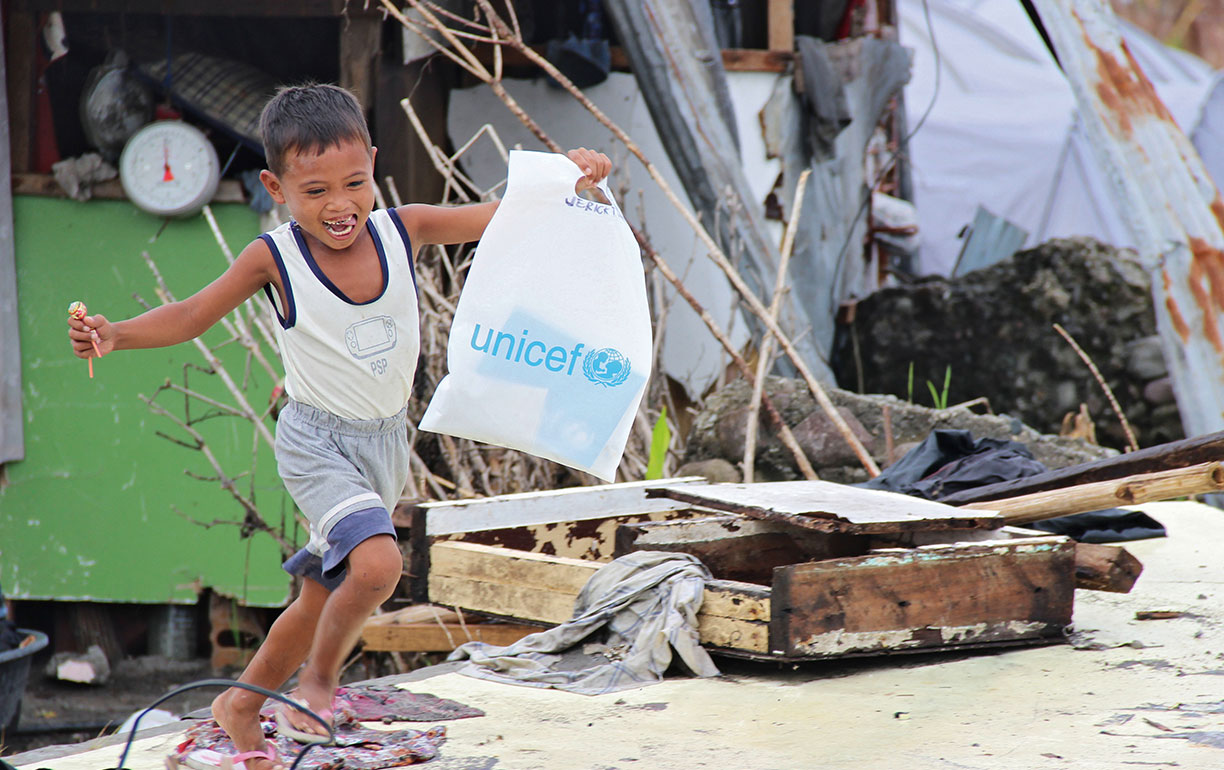 The planning for the reconstruction of the Lufthansa Cargo Center is well underway. So planet took a closer look at how the fully automated Unicef warehouse enhances efficiency. A visit to the highly effective hub in Copenhagen – the central facility for the distribution of relief supplies whenever a humanitarian crisis occurs somewhere in the world. 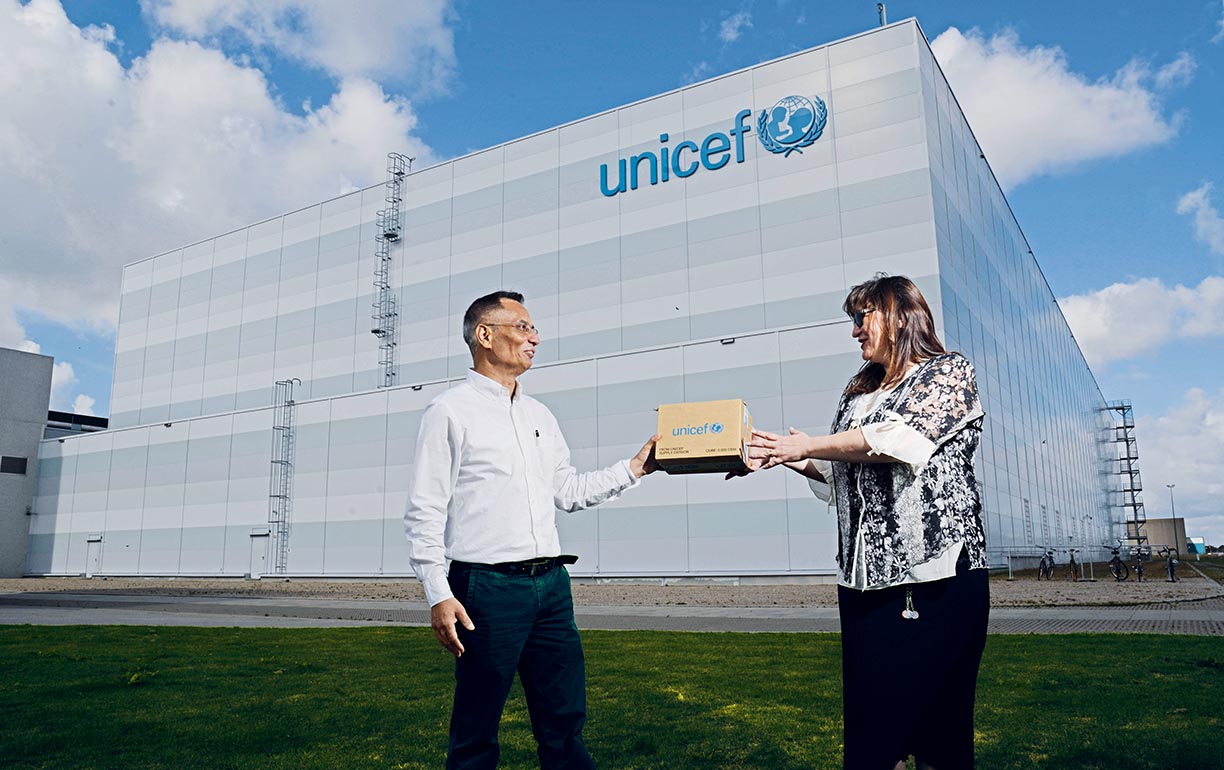 For one moment, the morning sun glinting between threatening storm clouds above the Øresund Strait makes the huge gray-and-white cuboid glow. The building is both impressive and plain. Around 20,000 tonnes of relief supplies per year are transported out Unicef’s global hub in Copenhagen’s Nordhavn: medicines, blankets, tents, buckets, filters as well as other equipment to treat water, and much more besides. A total of over 850 different goods and product sets, called kits, whose purpose is to help children, and families are stored in the warehouse. 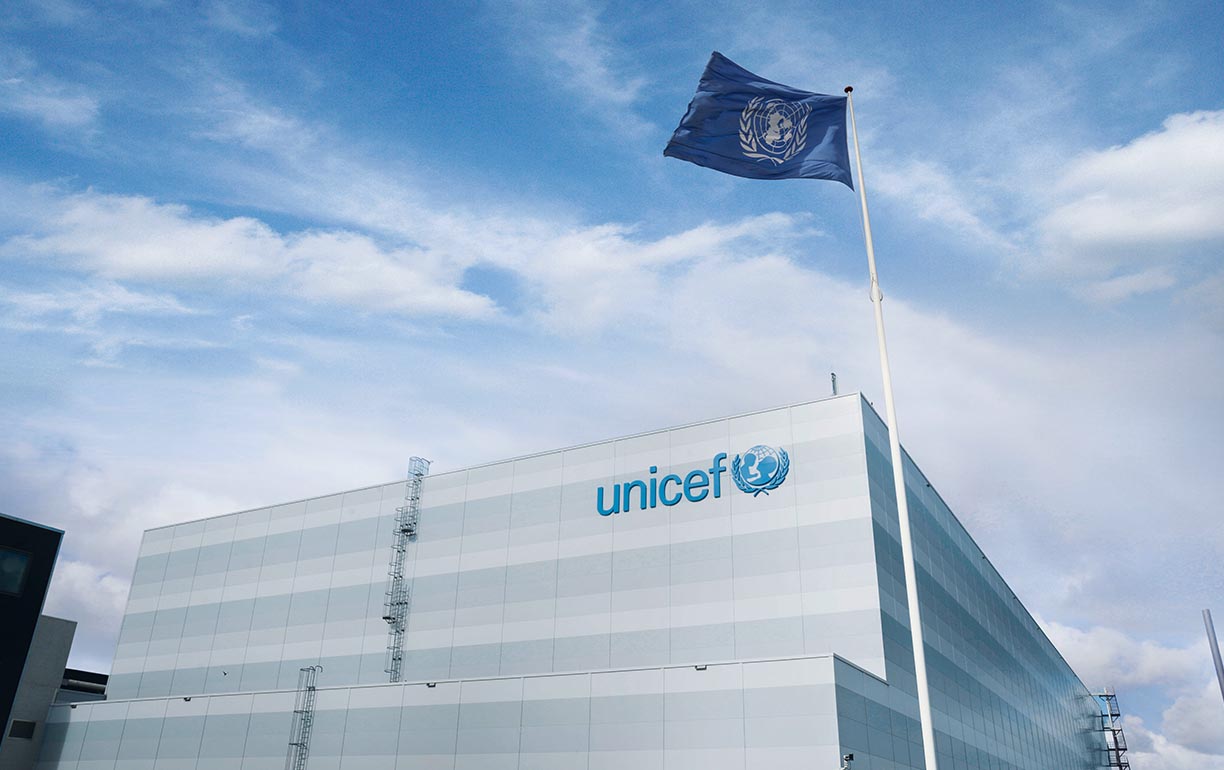 In its state-of-the-art warehouse in the Danish capital, the United Nations International Children’s Fund handles “only” five percent of the total supplies procured by the organization. “The majority of Unicef’s supplies, such as vaccine, therapeutic food, and mosquito nets, go directly from the manufacturer to the consignees – they do not transit through Copenhagen.” explains Elena Trajkovska, Unicef’s Chief of International Transport. “But our warehouse in Copenhagen is vitally important for supplies in emergency situations, especially kit-packing.” 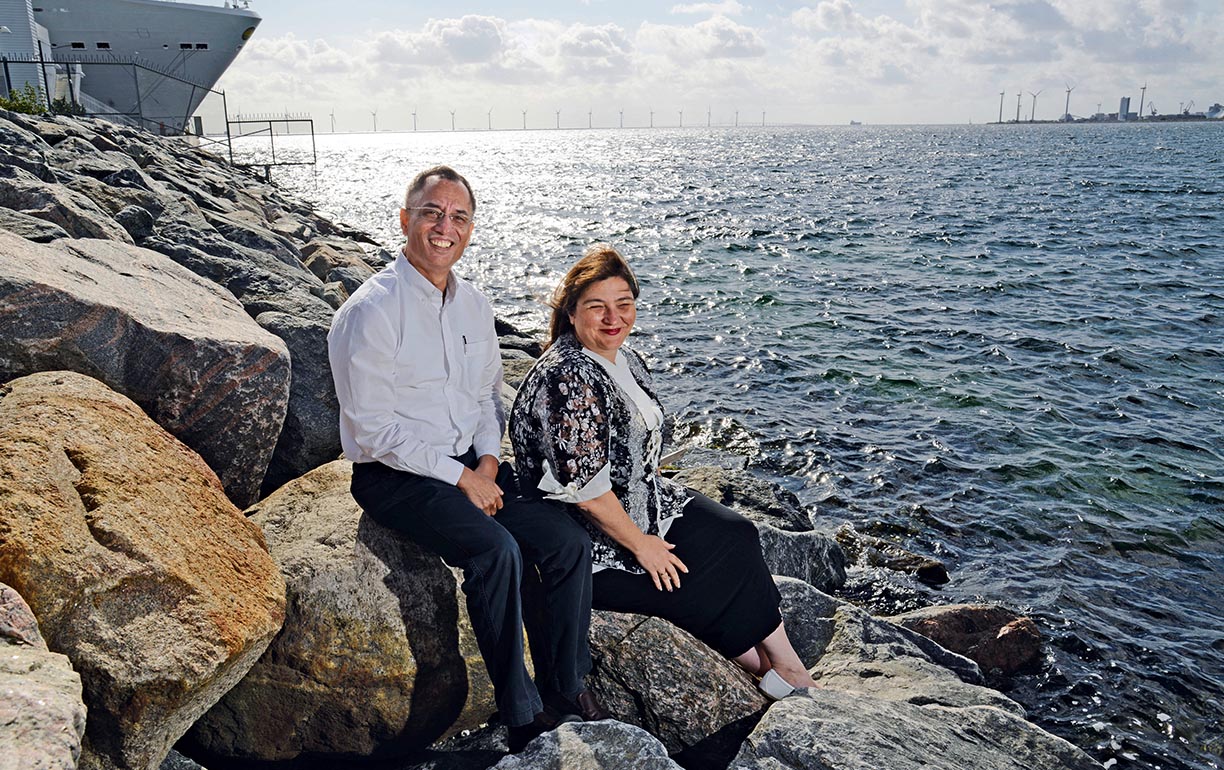 When the violence in Syria and in Iraq triggers new waves of refugees, when a storm like Typhoon Haiyan leaves millions of Filipinos homeless, when the Ebola virus threatens people in West Africa, that’s when the central warehouse in Copenhagen capitalizes on its strengths.

In any emergency, Elena and 320 colleagues supporting Unicef’s supply and logistics operations are stationed in Copenhagen have set themselves the goal of ensuring critical supply items reach countries within 72 hours from when they are ordered by the Country Office. “You can only help effectively if you’ve got your supply chains well organized”, says Elena. She is from Macedonia and has been working for the organization since 1993. 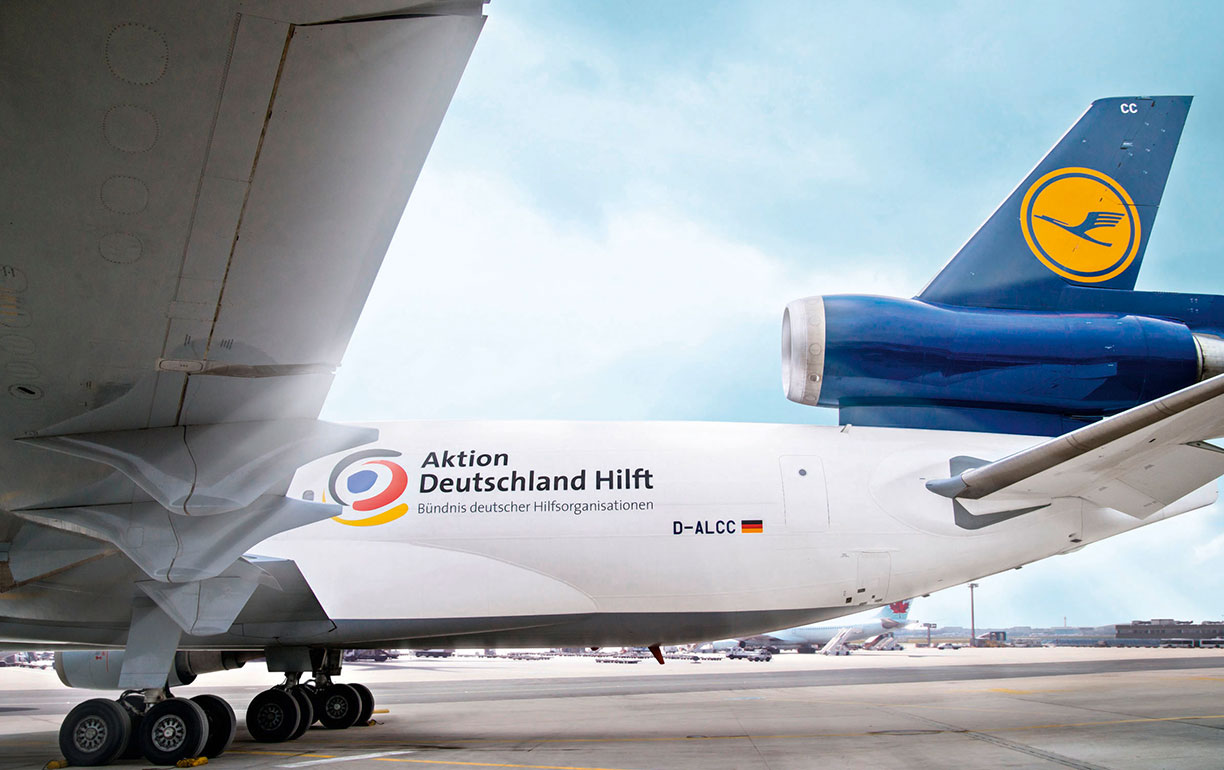 Airfreight is considered as the first choice to deliver emergency shipments. Air shipments represent close to 70 percent of the total number of shipments in a year. Efficient warehousing logistics also plays a major part in successful relief operations. The hub in Copenhagen is by and large automated and perfectly networked with the inventory control and tracking systems.

At any given time, the computerized system knows what items are being ordered and where they are in the process getting ready for shipment. A high-bay warehouse with eight autonomous fork-lifts bring supplies to and from 36,000 pallet spaces as they come in, and as they are called out for packing. In addition, there are two long and five short packing lines, two pallet-handling robots, one electric in floor track and an assembly line for the few tasks that need to be carried out by hand. 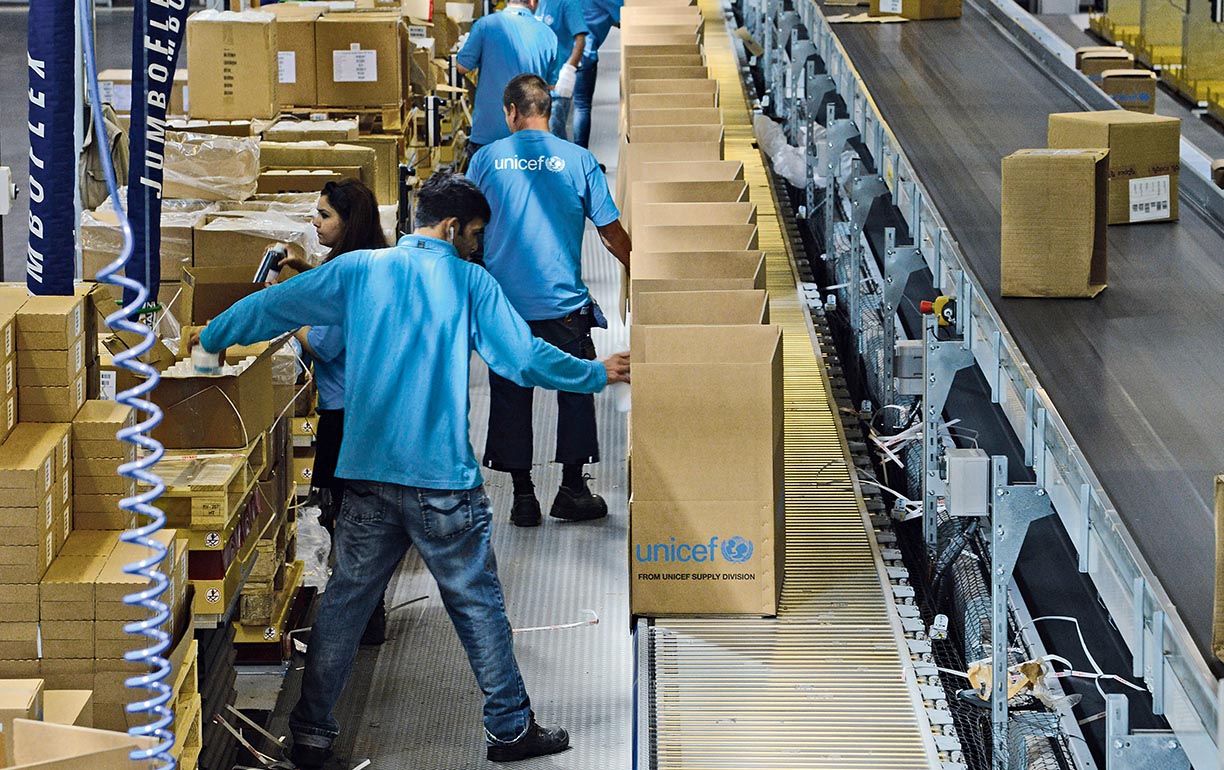 Raju Shrestha, Chief of the Logistics Center, is in charge of 40 warehouse logisticans and also manages the Unicef hubs in Dubai, Panama and Shanghai, knows from his own experience how modern warehousing technology saves lives. The engineer from Nepal set up a water supply system in remote villages at the beginning of his work for Unicef. “We used to be able to pack only 500 Family Water Kits per shift. Since our hub in Copenhagen became fully operational in February last year, we manage 850 per shift.”

Thanks to automation, the kits containing health supplies such as medicines and hospital equipment and family water kits containing water purification tablets, buckets, jerrycans and soap can now be put together in Copenhagen faster than before. Crucial in this context: the 3,000 trays for small parts, which are automatically filled with the various relief supplies on winding conveyor belts and assembled into packages at the end. 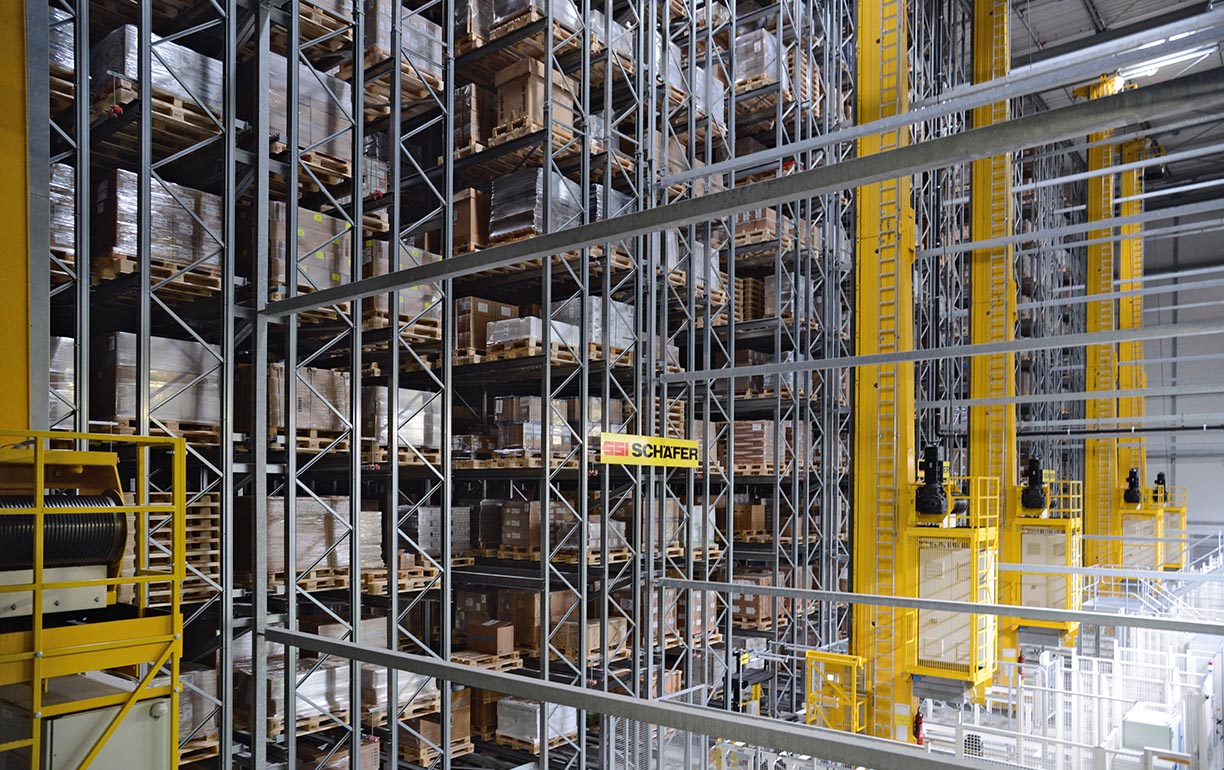 One click on the computer and processes such as storage, packaging and retrieval are reliably and swiftly implemented. The fact that 362,000 kits were forwarded from Copenhagen last year is attributable to the perfect dovetailing of all processes. The most frequently requested package in emergency situations was the Interagency Emergency Health Kit, a standardized combination of different medical supplies developed by various relief organizations.

The logistics center in Copenhagen has been fully operational since 2013 and has accelerated Unicef’s disaster responsiveness by 50 percent thanks to automated processes and modern IT networking. Raju Shrestha (l.), Chief of the Logistics Center, and Elena Trajkovska, Chief of International Transport, work hand in hand. The Unicef Global Warehouse was built as a gift from the Danish government.

2.839 billion dollars – that’s how much Unicef spent in 2013 on supplies and services for children, mothers and their families.

Find out more in the planet app edition, available free on the iTunes Store, on GooglePlay and online at:

Anyone who wants to help must be fast – in the onset of emergency response there is no alternative to airfreight. Those in positions of responsibility at Lufthansa Cargo know this and developed collaboration in the cargo airline’s home market with the relief coalition ‘Aktion Deutschland Hilft’. In an emergency, their freighters can be withdrawn from operative business at short notice.

The Øresund region as a turntable:

The Unicef warehouse is located right in between the container port on the Øresund Strait, just a few kilometers away from Copenhagen (Kastrup) International Airport. Raju Shrestha and Elena Trajkovska became involved with Unicef following humanitarian work in their respective native countries Nepal and Macedonia.

Anyone who would like to support Unicef can do so in a variety of ways. More about the organization and Unicef’s supply and logistics work at