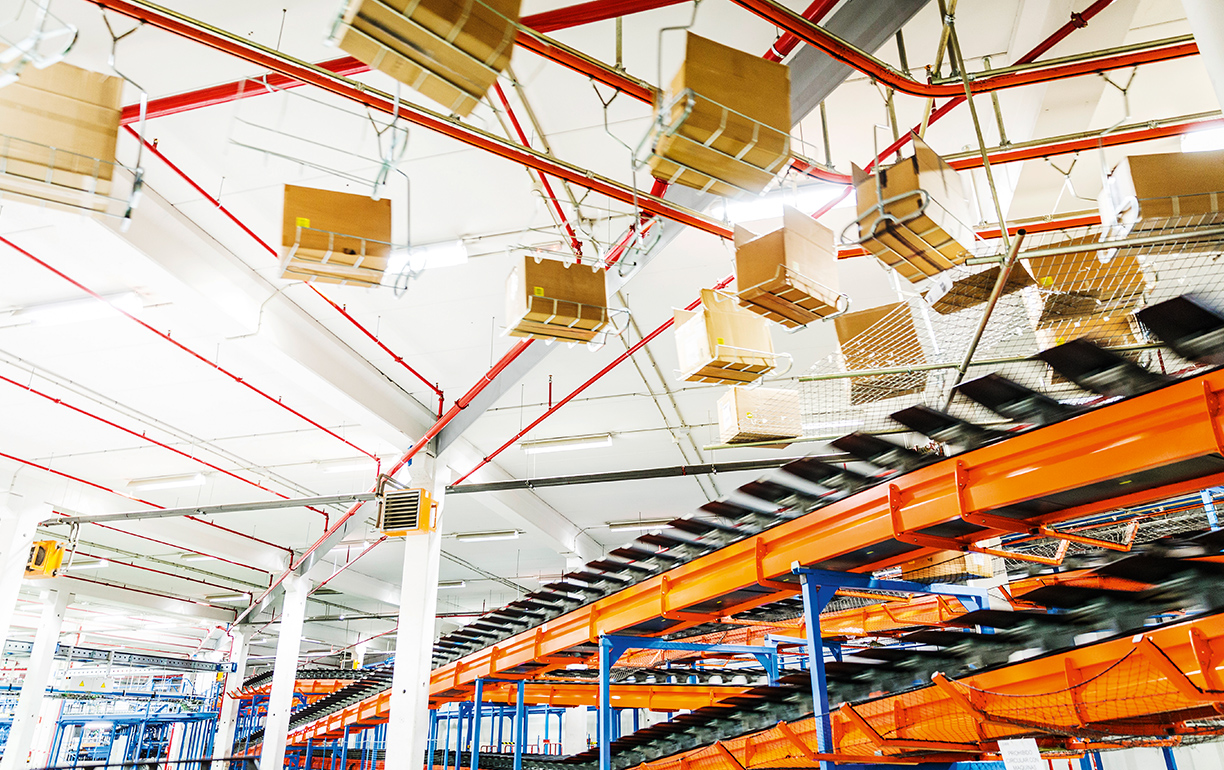 The logistics of Zara’s parent company Inditex is uncompromisingly focused on speed, as well as small-batch production and delivery structures. Airfreight makes the global expansion possible in the first place. A Spanish success story with a whole lot of reasons to be amazed.

Can eight fashion labels be successfully marketed internationally without any kind of advertising? Can dresses, jackets, shoes and accessories be supplied from Spain to all points of sale in 88 countries in less than 48 hours? Can new products be delivered to 6,900 stores in Europe, America, Asia and Africa twice weekly without sending logistics costs through the roof and sapping away profits? The answer to all three questions is: yes, they can!

Customer-oriented nucleus: the classic Zara logo lights up elegantly and discreetly above the entrance of the store at Avenida Juan Florez 64-66 in the Galician port city of La Coruña. This is where Amancio Ortega opened the first Zara boutique in 1975, selling fashion manufactured by the company itself. According to Forbes, Ortega is one of the richest persons in the world.

“Word soon spreads if you offer a good product with a good price-performance ratio.”

Abel Lopez, the most senior Supply Chain Manager at Inditex, pictured here in a Zara showroom at the corporate headquarters, approves of the fact that the company does not use any advertising.

Over the past 30 years, Inditex has advanced to become the world’s second biggest textile company, trailing only in size today behind the American sports product manufacturer with the swoosh as its logo. The stores of Inditex’s brands Zara, Massimo Dutti, Pull & Bear, Bershka, Stradi-­varius, Oysho, Zara Home and Uterqüe have been decorating shopping malls all over the world for quite some time. 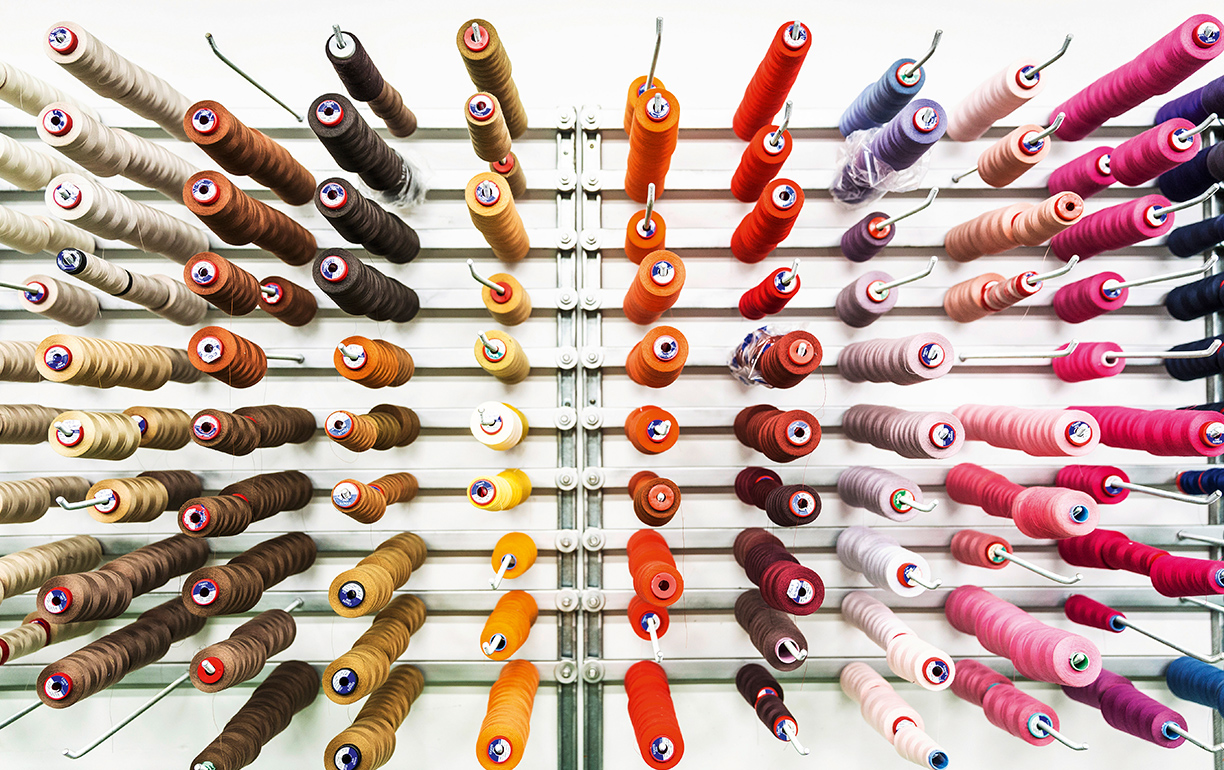 The stock-exchange listed Spanish family-run company has been able to write this success story because it has done many things better than its competitors – and some of them in a different way. In a completely different way. Even though nowadays very many people are familiar with the main brand Zara, Inditex’s rise to business success has taken place relatively discreetly, in keeping with the style of the company’s founder, Amancio Ortega.

He opened the first Zara boutique, which the firm still owns today, at Avenida Juan Florez 64-66 in the Galician port city of La Coruña in 1975. Over time, Ortega grew to become one of the richest persons in the world, according to Forbes. Despite this status he very rarely puts in a public appearance. Nestled in a valley in the small town of Arteixo near La Coruña, the architecture of the corporate headquarters typifies the discreet style of the mastermind behind Inditex.

From here, the global supply chains are controlled that form the backbone of this fashion empire. The state-of-the-art main building is more reminiscent of the administrative center of a medium-sized enterprise than of a global corporation.

Yet the complex has huge dimensions underground and is a hub of production, distribution and management tasks, with over 4,000 of the more than 146,000 Inditex employees worldwide working here. One of them – and probably one of the most important – is Abel Lopez Cernadas, a friendly man whose business card bears the unassuming title of Supply Chain Manager.

He holds his internal meetings in an open-plan office in the presence of over 100 employees. In actual fact, Lopez is the head of global logistics and as such shares responsibility to a large extent for the expansion drive. “Fast logistics is the key to the further growth of Inditex,” he says. In 2015 alone, the company opened approximately 400 new stores worldwide. And the development is planned to continue at this pace for quite some time. 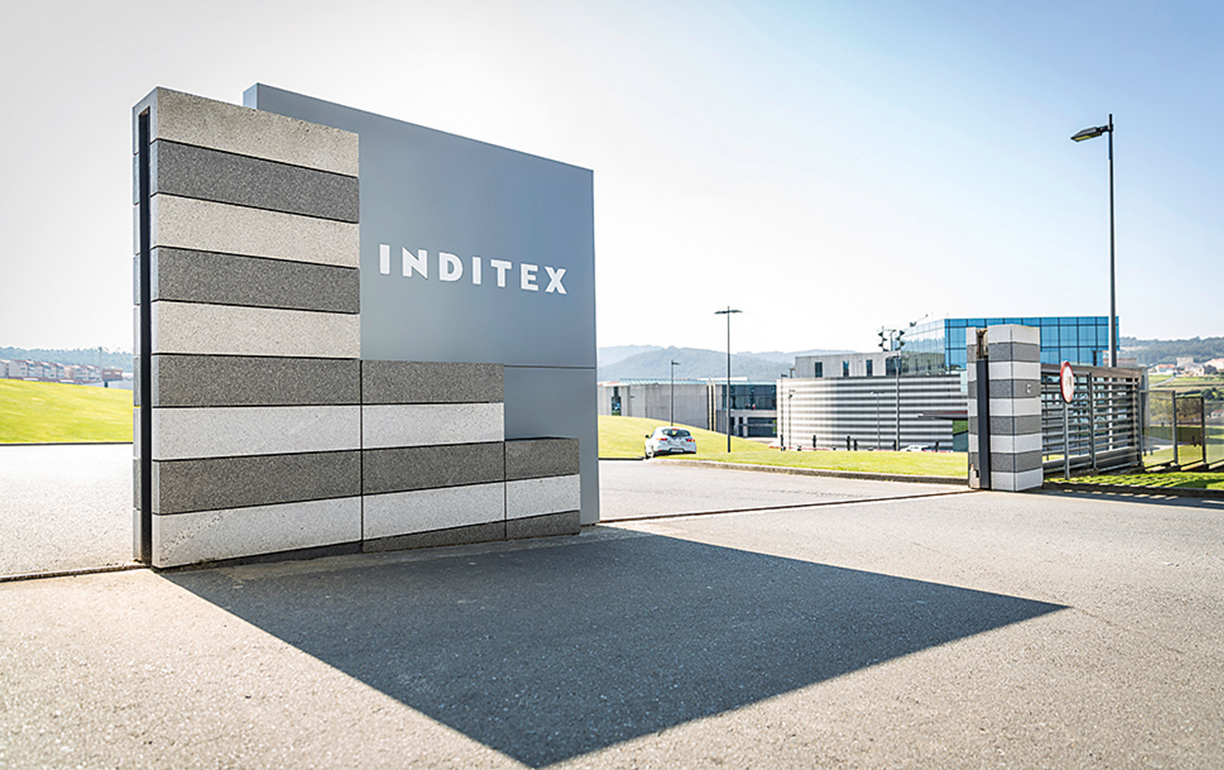 Inditex also has a strong internet presence, operating in 29 markets to date – with an upward trend! This fall and winter, platforms were rolled out in Taiwan, Hong Kong, Macau and Australia. E-commerce provides the opportunity to attract new groups of customers and target people who dislike shopping outdoors and those who are pushed for time. Here too, logistics is an extremely important success factor. 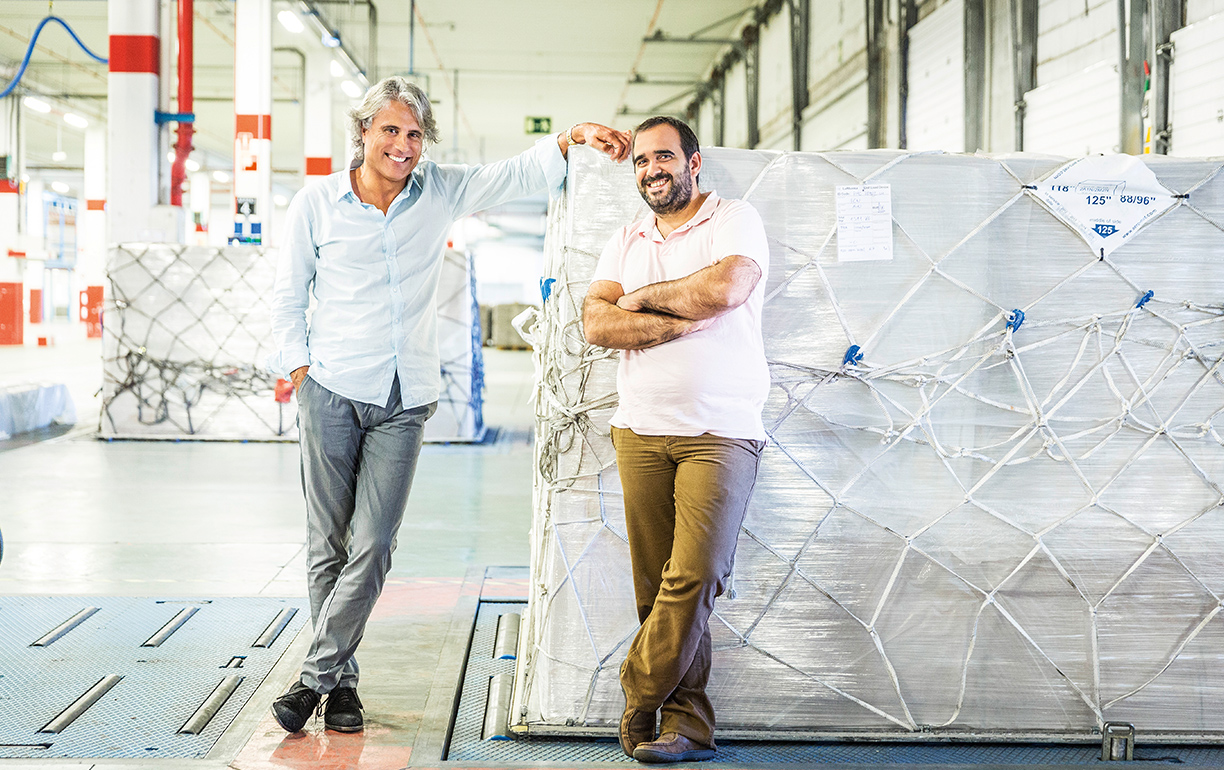 “LufthansaCargo’s extensive and high-frequency network makes it an important carrier for Inditex.”

André Pinto (r.), Key Account Manager for Inditex at the forwarder JIT, one of the company’s several logistics partners, which shipped approximately 230,000 metric tons of airfreight in 2015, pictured here with Jorge Alves from Lufthansa Cargo.

Control is crucial for the logistics specialist Abel Lopez.

“We operate like an airline, by pooling everything at our four main hubs in Spain and then feeding our network.” All European stores are served by truck. Garments that cannot reach the stores by land within 36 hours of being ordered are transported as airfreight.

Airfreight accounts for around 40 percent of Inditex’s exports, a total of approximately 230,000 metric tons in 2015.

Airfreight shipments for individual destinations are already consolidated and given a security check at the Spanish distribution centers in Arteixo, Zaragoza, Guadalajara and Madrid. This way the boxes can be quickly loaded on board the aircraft and just as quickly broken down at their final destination, reaching the individual stores without delay.

The busiest airfreight route is currently the connection from Zaragoza to Mexico City: five freighters loaded with fashion items, accessories and store equipment fly to the Mexican capital every week on behalf of Inditex. In addition, substantial quantities are transported to this growth market in the cargo holds on passenger aircraft. The company is also heavily engaged in activities in Asia. Zara and other Inditex brands are widely represented today in Japanese, Korean and Chinese streets and shopping malls.

“Lufthansa Cargo’s extensive and high-frequency network makes it an important carrier for Inditex.”

,says André Pinto, Key Account Manager for Inditex at the forwarder JIT. The cargo airline only recently began doing business with the company, but it already flies around three percent of its airfreight. “Most of this is transported by truck to Frankfurt and Munich for onward distribution via the global network,” adds Jorge Alves, Sales Manager at Lufthansa Cargo, who attends to the key account from nearby Porto. “Lufthansa Cargo is the preferred carrier for many German shippers,” says Abel Lopez. “But I’m sure that there is also a lot of potential for Lufthansa Cargo outside of Germany. We’re a good example of that.”

The fashion industry has changed rapidly in recent years. Twenty years ago, shoppers could look forward to new products hitting the stores twice a year: in summer and winter. Now, with the advent of micro-seasons, some fashion companies pride themselves on putting a new collection in the stores every month. When asked what sets the rhythm for Inditex, Abel Lopez replies: “We essentially create a new collection every day!” His explanation: “Anyone who goes to great pains to develop a new collection twice or even four times a year in the hope of success is a player – it’s a gamble with extremely high odds. We at Inditex work differently. We know exactly what the customers want, produce it and supply it to them without delay.”

But how do you figure out what the customers really want? It goes without saying that the stores of all Inditex brands work with an intelligent POS cash register system, which transmits detailed reports in real time via intranet. Reports that tell the logistics managers which items are in high demand at any particular location. These figures form the basis.

According to Lopez, however, the key to major success is the “gut feeling of the sales staff.” Every day, logistics specialists from Lopez’s team in Arteixo ring up store managers all over the world to hear what their gut instincts are telling them. They ask whether all shipments arrived in perfect condition, what is most urgently required, which trends are continuing and which are coming to an end.

“Each of my employees is responsible for a dozen or more stores and thus builds up extremely valuable know-how.”

In the stores of Massimo Dutti, Pull & Bear and Stradivarius, for example, as a rule there is only one item available in each size. The assortment is replenished by new deliveries twice weekly. On-site stock inventory is almost at zero level as everything has usually been sold within a week. The products are kept scarce to a certain extent – and the logistics have conformed accordingly.

The effect is that shoppers grow accustomed to dropping by at stores frequently because they know that something new will be available in a few days. And they have learned to snap up items they like immediately as they may already be sold out when they next visit the store.

On average it only takes two weeks for newly designed garments to reach the stores. More than 50 percent of the merchandise is manufactured in Spain, Portugal and other European countries as well as Morocco and Turkey to ensure fast transports. The rest is produced worldwide. In a “code of conduct,” social and ecological standards are specified for all Inditex suppliers. These are regularly checked.

“Sustainability in every respect is the most important trend in the fashion business.”

,explains Abel Lopez. The motto at Inditex is “right to wear.” By 2020 the company also intends making all its stores “eco-efficient.” Even today, numerous stores are already fitted in such a way that they use 30 percent less electricity and 50 percent less water than conventional stores.

At the corporate headquarters in Arteixo, numerous processes also focus on conserving resources. At the production level, specialists use computers to work out how to waste as little fabric as possible when cutting the patterns. One hall further along, in the fully automated packing facility, the boxes have obviously been used several times. But they are only turned into waste paper when they really are unfit for purpose.

The facility was custom-built by Inditex experts in collaboration with a Danish plant and machinery manufacturer.

35,000 garments along with delivery slips can be packed for individual stores every hour. Immediately after the production stage, a smart mechanism on a clothes rail ensures that, for example, a batch with ten sports coats ends up in the right box. Beneath the ceiling, the boxes are whisked across long conveyor belts.

Under these, a multitier assembly line transports the textiles at astonishing speeds to precisely the place where a lifting device drops them into the right box. On average, brand-new merchandise accounts for about 40 percent of the contents of the boxes. The Zara assortment alone currently encompasses 18,000 products. In addition, there are thousands more products from Inditex’s brands. The secret to the success of Inditex is its broad-based deployment.

A further special characteristic of the company is the fact that it refrains from using any advertising whatsoever.

Shootings only take place for its own online shops and publications. There are no ad campaigns in fashion magazines. Instead, the company makes sure it operates stores in prime locations with large numbers of shoppers. “Word soon spreads if you offer a good product with a good price-performance ratio,” says Abel Lopez.

“This concept is also an expression of our proximity to the customer.”

He then goes directly to the round table in the middle of the huge open-plan office for the next meeting to hear what the store managers all around the world have to say about the wishes of their customers.