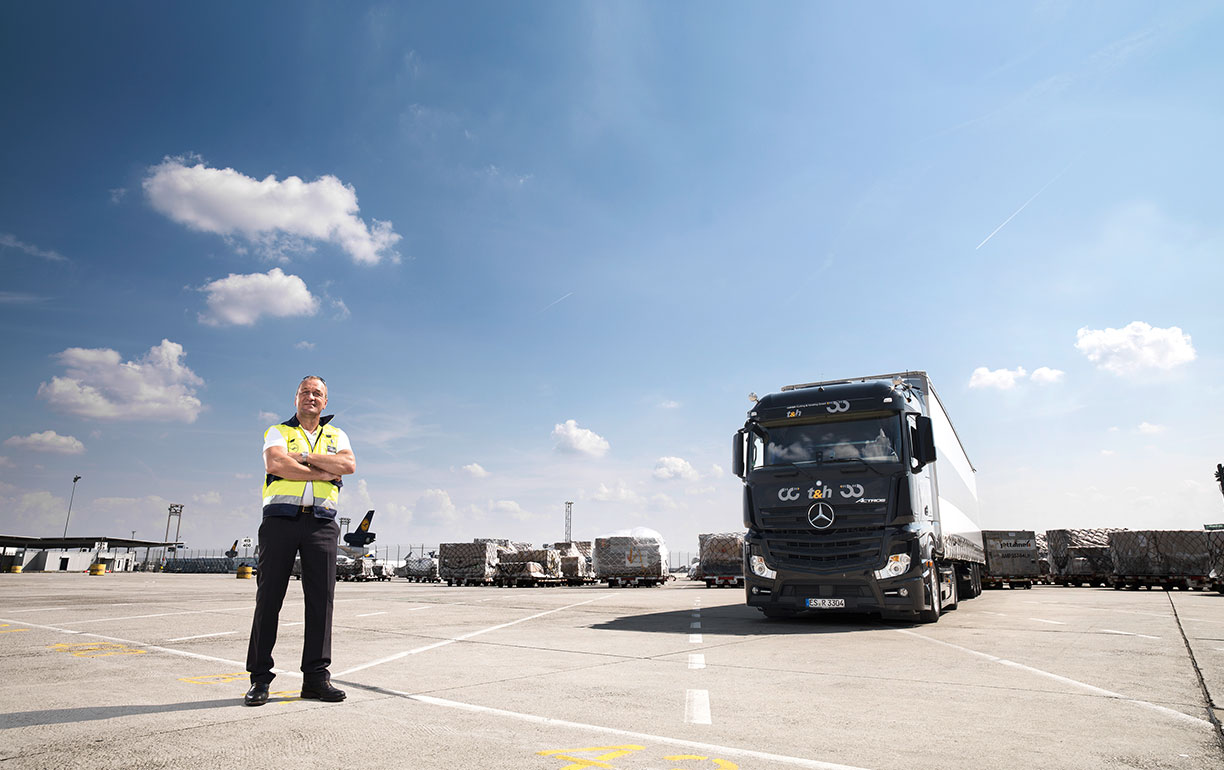 Markus Rudolph actually just came to the Lufthansa Cargo Center in Frankfurt to get some photos taken of his newest truck in an airport setting. But then Ramona Pieper approached the air cargo trucking operator holding Lufthansa Cargo’s Quality Q, now so familiar throughout the industry.

Rudolph’s truck, an impressive black Mercedes-Benz Actros, was the perfect backdrop for putting her message in the picture. Following the suggestion of Pieper and her team, Lufthansa Cargo has been working on an IT-based ramp and slot management system for the control of landside customer and system transport since the beginning of 2013.

Trucking competence: truck forwarder Markus Rudolph in the outgoing allocation area in Frankfurt with one of his 35 road feeder service trucks. 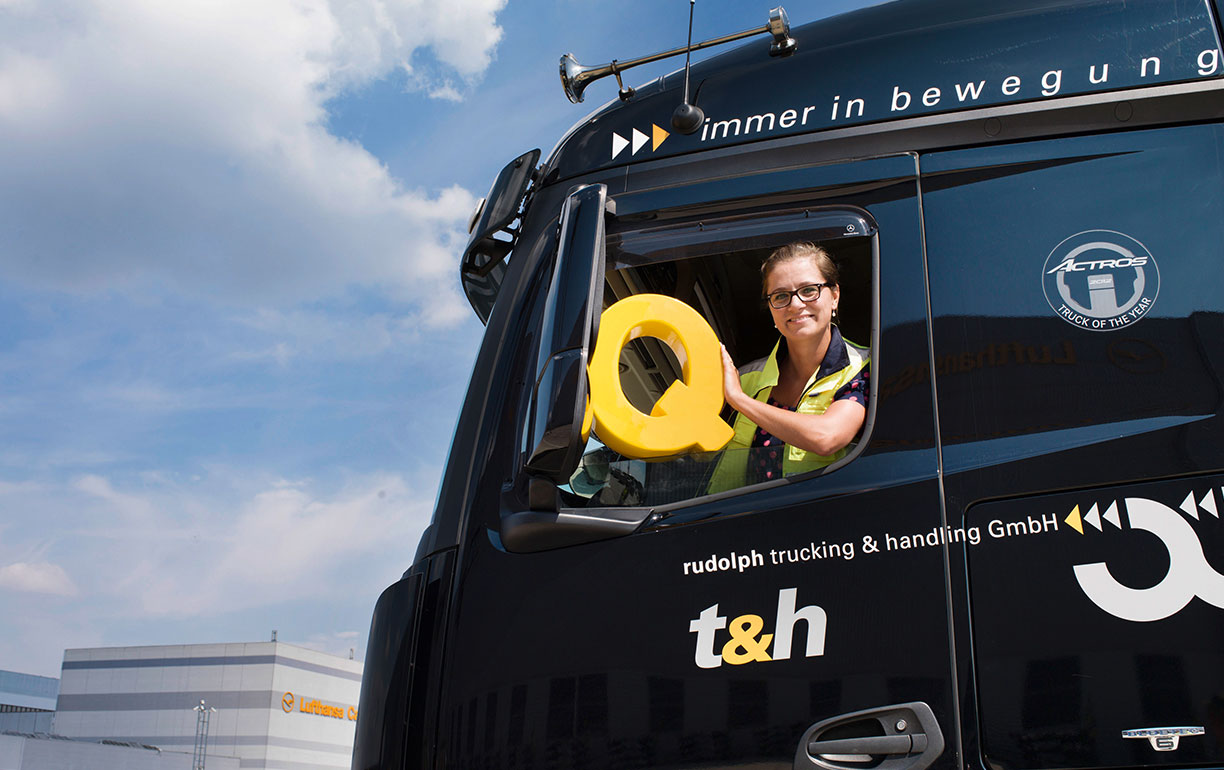 It is one of the few airlines worldwide to do so. “Direct Ramp” provides customers with delivery or pick-up slots so that all processes can be perfectly prepared and the waiting times for the trucks at the ramps can be shortened. Forwarder Markus Rudolph is also pleased about this improvement in quality and immediately agreed to an interview with the planet film team for the magazine’s app edition on his experiences as an air cargo trucker.

Quality improvement: the team led by Ramona Pieper, shown here in the truck holding a Lufthansa Cargo Q, has launched a new IT-based ramp and slot management system. It improves the control of landside customer and system transport.

Clear vote.
The Munich ifo Institute analyzed over 6,800 answers given by German companies for the calculation of its Business Climate Index. The result: 73 percent of the industrial enterprises described air transport as “important” or even “very important”. In particular the segments with above-average growth rely on first-class air transport connections. These include the mechanical engineering, pharmaceutical and automobile sectors. The survey related to passenger transport as well as air cargo. In Germany, airfreight accounts for only two percent of imported and exported tonnage, but 30 percent of imported and exported values. This corresponds to roughly 204 billion euros per year. Despite the paramount importance of air transport for the success of the “export world champion” Germany, the industry is confronted with an extremely tough economic environment. In this context the German Air Transport Industry Association (BDL) has criticized the air traffic tax, the restrictive night-flight regulations and emissions trading.
“How important is air transport for your company?”
This was what the Ifo Institute asked companies in three key industrial sectors of the export world champion Germany. The result: Germany’s industry needs air transport
89,6 % Mechanical engineering
85,9 % Pharmaceutical industry
79,6 % Automobile production
4th Security Conference.
There was an impressive response throughout the industry to this year’s Lufthansa Cargo Security Conference. Experts from numerous European countries and from all industrial sectors flocked to the Commerzbank Arena in Frankfurt to exchange ideas on the latest developments, which included solutions in response to the ACC3 regulations for cargo from third countries outside the EU and the USA. Keynote speaker was Wolfgang Ischinger, Chair of the Munich Security Conference, who addressed the conference participants about the international security situation and its impact on supply chains worldwide.
cd.Solutions USA.
Lufthansa Cargo now also offers its special product cd.Solutions for To-Door shipments to the USA. These shipments can be delivered to more than 30 cities via the gateways Atlanta, New York City and Chicago. cd.Solutions for imports to Germany and to the rest of Europe has already been available for a decade. The direct delivery saves time and money and gives customers the certainty of an optimally planned logistics chain. The USA is Lufthansa Cargo’s second biggest market and the road feeder services network has been extremely broad-based for years.
Double distinction.
The future-strategy program “Lufthansa Cargo 2020” wins over the logistics industry: at the prestigious Air Cargo Excellence Awards Lufthansa Cargo received the Platinum Award in the frame­work of the World Cargo Symposiums 2014 in Los Angeles and scored highly in numerous categories. In ­addition, the American logistics service provider Expeditors International acknowledged Lufthansa Cargo’s performance with their 2013 Award of Excellence. Lufthansa Cargo has begun consolidating and extending its leading role in the industry with multi-billion euro ­investments in the future of its airfreight business. The five brand-new Boeing 777 Freighters, three of which have already been put into service, are the most visible sign of this strategy for the future. IT investments, the increasing digitalization of all airfreight documents and the new logistics center at the Frankfurt hub are also contributing considerably to this development.
Cargo world as app.
Experience the world of Lufthansa Cargo as an app. A new app is now available for customers and anyone else who is interested. Following the Tracking App and the planet App, the new Corporate App invites you to discover the world of the cargo airline with the crane emblem. The Corporate App can be downloaded free on the iTunes Store and on Google Play.
www.lufthansa-cargo.com/companyapp
Photos:
Matthias Aletsee
planet 1/2014