An MD-11 freighter in the Lufthansa Cargo fleet will in future keep the name “Namaste India” (Greeting to India) on flights in the carrier’s global network. The aircraft with the registration D-ALCJ was named by Dr. Alexis von Hoensbroech, Board Member Products & Sales of Lufthansa Cargo, and His Excellency Shri Ashok Gajapathi Raju Pusapati, Honourable Union Minister of Civil Aviation, during a ceremony at Indira Gandhi International Airport. In keeping with Indian tradition, a coconut was broken for the plane to be sprinkled with India’s typical beverage.

The freighter was named “Namaste India”, symbolising the significance of India as one of the most important markets for global air freight services. Dr. Alexis von Hoensbroech states: “The ‘Namaste India’ greeting also illustrates the special bond between Lufthansa Cargo and India. We are proud to be the leading European cargo carrier from India to Europe.”

Lufthansa Cargo has had long-standing connections with customers in the Indian air cargo industry since 1959 and grew further with the first freighter operations in the 1970s. Lufthansa Cargo is today offering 59 weekly flights between India and Europe including the services of Lufthansa Passenger Airlines and Austrian Airlines.

"Namaste India" is the eighth Lufthansa Cargo aircraft to be renamed in the last few months. The names of the aircraft are based on the winning idea of an open creative competition organised by Lufthansa Cargo to rename their entire fleet in 2013. More than 40,000 potential aeroplane names were received by Lufthansa Cargo within six weeks, and the jury decided on the idea of "Say hello around the world". All the freight aircraft names in the Lufthansa Cargo fleet are now being changed to greetings in around 20 languages.

Here is the right contact partner for your press queries. But please understand: The phone numbers and email addresses are only for journalists. We can unfortunately not handle customer queries.

Should you wish to contact Lufthansa as a customer, please get in touch with your local Lufthansa Cargo office. All the details are on the relevant country page.

Customers in Germany can address queries to a contact partner per email at lhcargo@dlh.de or by phone 01805-747100 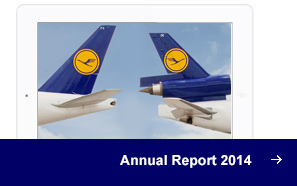